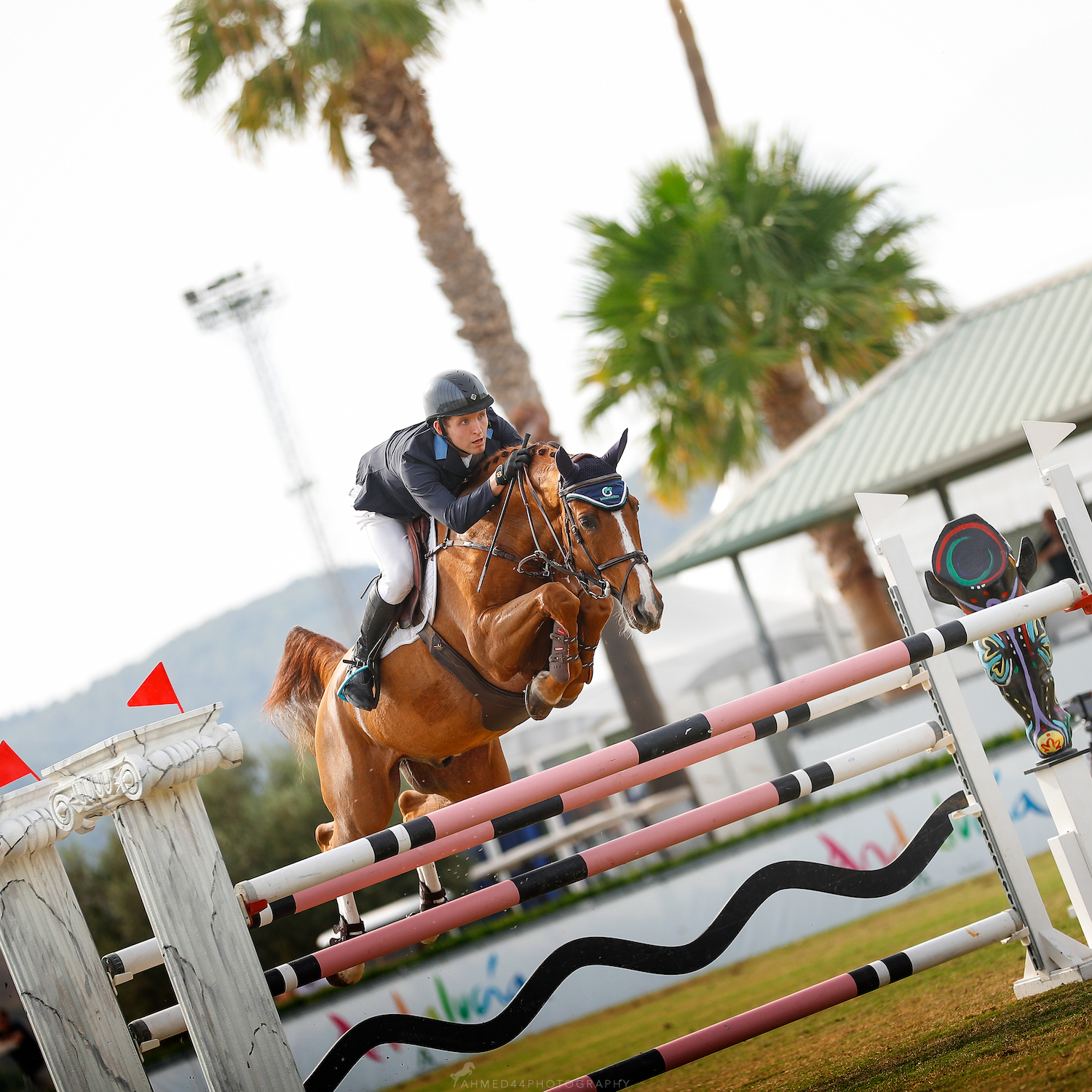 Irish riders set the pace on the last day of the second week of jumping.

There was a great atmosphere in the stands on the last day of this week’s CSI2*, October Tour here at Dehesa Montenmedio.  Max O’Reilly (IRL) took the top of the podium in the GP, 1.45m, Longines Ranking class, with his 10yr old gelding, Babar de Bussy who has been his partner since January 2019. This is their first international GP victory and was very well earned as they beat 11 top class horses and riders in a very exciting jump off from a class that started with 52 entries.

Marcos Nuñez was the course designer today and the track was difficult enough resulting in faults pretty much spread around the obstacles, but especially over the last oxer, which was just after the stands on a related distance.

The jump off was a really international affair with Irish, Spanish, British and the Canadian rider Liz Bates, all vying for the top spots. Max was actually first to go and set the pace with a decisive clear in a mere 39.50s which left the other riders everything to do with many popping a pole as they chased his time.

Second and third places went to Spanish riders.  Alberto Márquez Galobardes with the stallion Ucello Massuere, who is by Cassini II took second place.  Alberto has an established partnership with this lovely stallion, they participated the European Championships this year in Riesenbeck. Their time today was 39.78s leaving them in second place with just one horse and rider to go.  Manuel Fernández Saro was that rider, with a horse he was competing in the 1.30m class, just last week here at Montenmedio.  The lovely mare Acoufina PS, is by Action Breaker and she really stepped up to the task today in this 1.45m, Longines Ranking class.  Manuel rode and lovely calm clear and ended up in a comfortable 6th place.

In third place and jumping a foot perfect round with Tamino AZ was Julio Arias who is based in Belgium. Tamino AZ is by Tsar Hero, ds For Hero de Hus.

In the 1.40m Big class Kevin Gallageher was our Irish winner with Clark, who is owned by Julia Nagler.  It was a very competitive class and this combination proved to jump an unbeatable round.  The track had an extremely tight time allowed, which caught out a few riders leaving them with one time fault and there were many who clipped one or more poles.  The Swedish rider Antonia Andersson had no such troubles, jumping a fast clear in the time to take second place in her first international partnering the 12yr old mare Javenia, who is by Non Stop.  The Canadian rider Rebecca McGoldrick, took third place close on the Swedish riders heels, with her lovely mare Fleur IV who is by Chatman, dam sire Darco).

The 1.25m Small Class was won by a Sunshine Tour regular, Kayleigh Watts (GBR) riding the 9yr old, Hello Zachary who up until this season, was ridden by Scott Brash.  The Ukrainian rider Kateryna Downer took the top two spots on the podium in the Small Class 1.10m, withBel-Mia SP and Excel respt.

The Young Horses (6 and 7yr olds) also had classes today and the 6yr olds had their first chance to take to the beautiful grass arena, Hickstead. Kristal’s Beauty B, who is from the Valbanera stud and ridden by Kevin González de Zárate, was once again the winner of this 1.30m, 6yr old class. Clearly demonstrating the quality of her breeding with great talent and consistency, she is by and F One USA, dam sire Inshallah de Muze.  The good work that Kevin does bringing on these young horses was seen once again as he also took second place with Enji du Barquet, who is by Qlassic Bois Margot in the 7yr old 1.35m class.  He finished behind Luca Moneta who rides for Italy and won the class with the fabulous mare Jolie Coeur D’Avril.Esta who is by Arko and she hasn’t missed a beat being high up on the leader board in all of the three classes she has jumped this week.

This brings the second week of the 2021 October Tour to an end and from Thursday  21st this coming week we move on to the third week of competition here at the Sunshine Tour with the CSI3* running alongside theCSYH*.