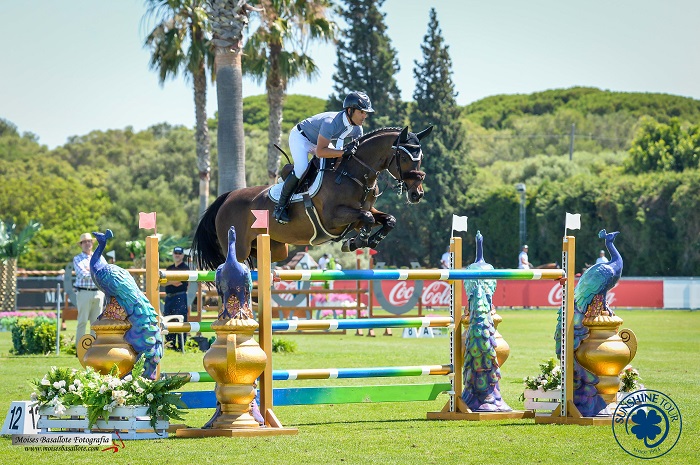 Ismael García Roque finishes off the second week of jumping here at Montenmedio, with a win in the CSI2*Grand Prix

The second week of jumping here at the Summer Tour finished off today in brilliant sunshine. Already over 100,000€ in prize money has been handed out here at Montenmedio and the final tally for the Tour will be over 180,000 €.

There were 40 entries in the Grand Prix an FEI Ranking class. Only 6 riders went clear in the first round over this tricky course and only three of these managed another clear in the jump off. In the end there was a difference of 3.56s between the winners on the podium.

Ismael García Roque and AIRLINE (AVEC x CORNET OBOLENSKY) were the winners in a fast time of just 31.58s. This is the third victory for the pair at the Summer Tour and they were also the recipients of the 2,000€ bonus prize that was sponsored by the online TV channel ClipMyHorse, given to the best placed Spanish rider in the class, with a subscription to the service. García Roque is a regular competitor here at the Sunshine Tour and has around 400 international competitions under his belt. Not only that, he has been in the top three on 40 occasions and taken first place in 23.

The other riders on the podium today were the rider from Catalonia, Joel Vallés with the lovely LOEWIE (x MARIUD CLAUDIUS) who took second place in 33.40s and another Spanish rider, from Madrid, Santiago Núñez Riva with VALENTINO DE HUS Z (VIVALDI DU SEIGNEUR x TROPHEE DU ROZEL) who we have seen competing here in the Young Horse classes at the Sunshine Tour. His time today was 35.14s finishing off a great week of jumping where this pair have improved with each outing.

Mariano Martínez Bastida was once again top repeating his win on Thursday with FAMEUS in the 1.35m class. Second was the Brazilian Olympic rider, Pedro Veniss and HAPPY GIRL T (x SANDRO BOY) and third was Kevin González de Zárate with URBAN DES GREZILS (x L’ARC DE TRIOMPHE) whose results have also been improving as the week progressed.

The young German rider Elena Appendino who celebrated her 15th birthday yesterday had another reason to celebrate today with victory in the 1.30m class riding the lovely BILLYJEAN. Second was Marta Mesa with ZOBIA BELLA (SILVERSTONE x LUX) who hasn’t been off of the podium all week and third was Castora Ortiz with COLOUR OF LOVE (CONENDRO II x COLMAN).

The 12 yr old Carlos Borho rode SIBELLE to victory today with their best result so far in the Tour in the 1.25m class, although he has had five placings here with some of his other mounts. The German rider Elena Appendino once again was in the top three, this time with DIABOLIK (x SCO) and finally third place was taken by Mario Rotllant with CERANO (UKATO x CAVALIER).

Next week is the last week of the Tour here at Montenmedio with the same format as this week: CSI2*, CSN1*, Young Horse classes and the CSNP1 Pony classes which will also be qualifiers for the Spanish Pony Championships.