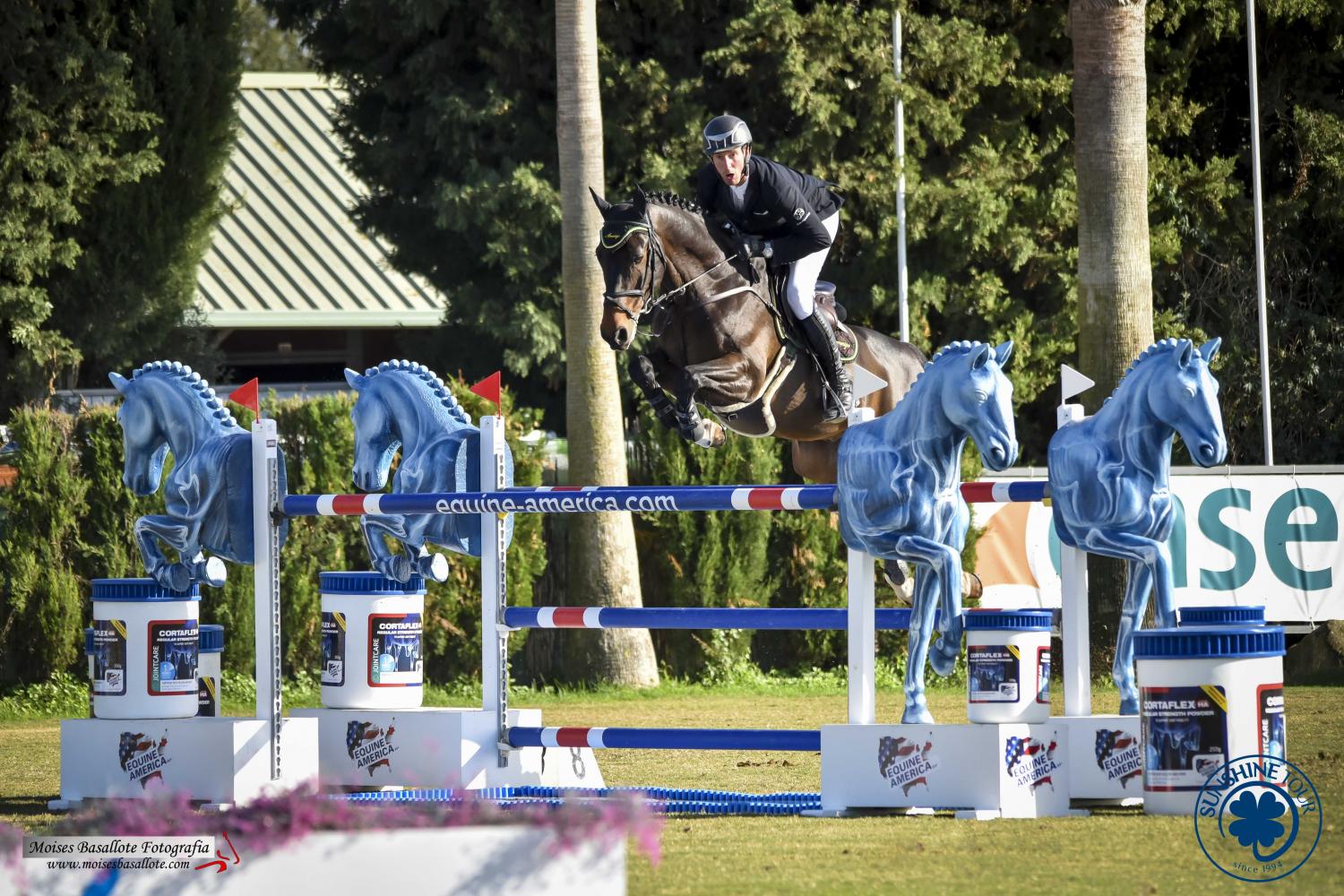 The Irish here at the CSI3* cannot be underrated as they continue to take podium places across the board.

The Swiss rider, Alain Jufer, is recently arrived here at the October Tour but his reputation precedes him.  Today he took the top of the podium in the Equine America sponsored, 1.45m Big Class, the highlight of the day.  This was held in the main ring here at Dehesa Montenmedio.  Alain was riding the talented 12yr old Westphalian, Cornet MM and they looked extremely comfortable in the arena producing an excellent round as they also prepare for the Andalusian Grand Prix class, held here on Sunday.  In reality this pair need no introductions with a plethora of successes on their CV, including both 5* Nations and World cup events.  This gelding is owned by Marlis Mühlebach and is by the top stallion, Cornet Obolensky.  Alain has been based with his friend Steve Guerdat since the summer of 2020 in Elgg where they work in tandem, riding, teaching and training.

There is no stopping Ireland with their riders’ winning streaks looking very impressive as we build up to the Nations Cup.  Today the young rider Francis Derwin took second place on the podium riding AHG Whiterock Cruise Down. This is a 12yr old, Irish gelding bred by Ann Fannon Clancy and he has given his owners, the Derwin family, a lot of happy times and great results as they watched him progress over the years from a 6yr old.  Kate Derwin is Francis’s sister, and she was the European Young Rider Champion with this lovely horse in 2019, whilst Francis started off his international career with him as part of the team that came fifth in the Europeans this summer, in Portugal, Vilamoura.

Completing the podium places was British rider who is sponsored by Equine America,  Matthew Sampson riding his regular partner, the 12yr old Ebolensky who is by Clinton, dam sire being Heartbreaker.  Matt’s track record with this horse speaks for itself with numerous good results in 5* classes and these two will be part of the British Nations Cup team next week! We really cant wait to watch these amazing combinations in the Nations Cup and the tension around the show ground is already rising!

Keeping the Irish on track, we had another win in the 1.40m class, at the hands of Max Wachman with Ikaros.  Ikaros is a 9yr old gelding by Chelltago Z, and is owned by Coolmore. Max is working with Cian O’Connor and demonstrated superb ringcraft in the jump off, beating the 16 other combinations that took part.

And so the Irish victories continue, this time in the 1.30m and from Commandant Geoff Curran with Dowth Hall who are on their third victory from the 5 classes that they have jumped in so far, here at the October Tour. Dowth Hall is an 11yr old Irish gelding by Flex a Bill and is very competitive in classes of this height, being both extremely fast and very careful.

Not letting the Irish side down, the 1.20m was won by Aisling Byrne with the super fast, Celeste SPB Z. Aislingis having an amazing Tour here so far with plenty of rosettes pinned up on her stables.

In the 7yr old Young Horse class the horses are really showing clear progression as they move towards their 8th year.  The top contenders today were Matthew Sampson on the top of the podium with the lovely Jacks O who has very consistent results.  In second was Kim Emmen (NED) with Astrid’s Lad, who we know very well here at Montenmedio as they were this year’s 7yr old Final winners in the  XXVII Sunshine Tour way back in February.  In third was Italian rider Luca Moneta once again riding the very consistent gelding, Epic.

In the 5yr old class the top two were Spanish riders today.  It was a 2 phase special and was won by Jose Antonio García Diana with Claddagh Hesa who is a Spanish Sports Horse, by Clarimo – Holst. Mere hundredths of a second behind was Mariano Martinez Bastida with Kapalony Z, by Kannan.