An impeccable round from Peter Moloney wins the Longines Grand Prix 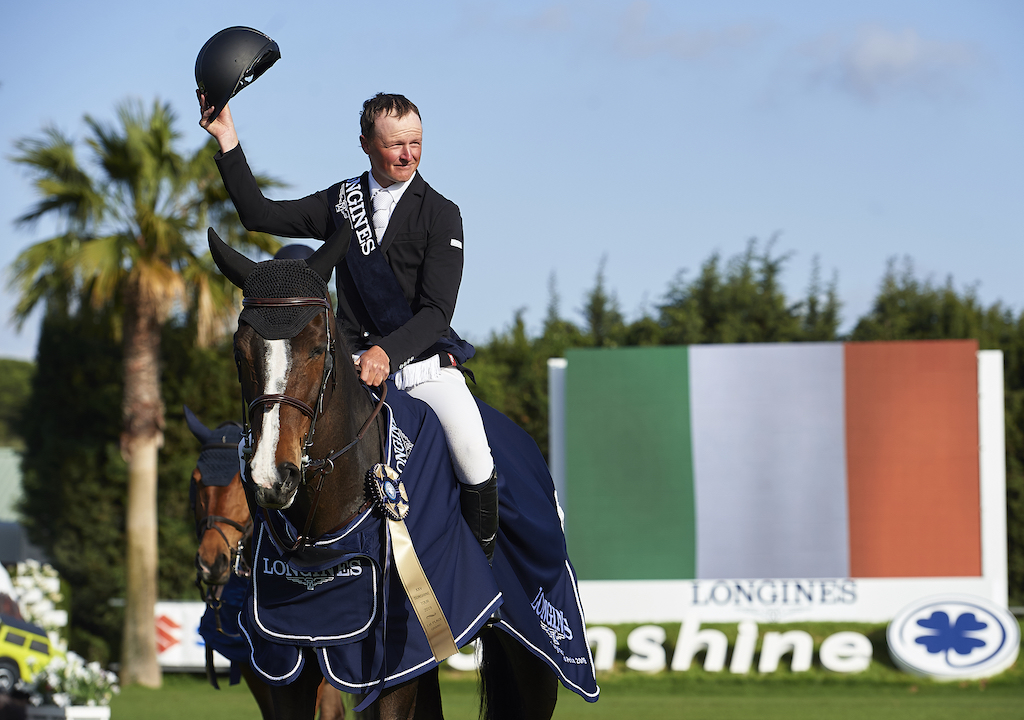 Today the Irish National Anthem rang out today, across the grounds at the 25th anniversary of the Sunshine Tour

It was an Irish top three in this prestigious Longines Ranking class designed by Javier Trénor. The winner was Peter Moloney who absolutely flew around the 11 horse jump off, on the 14yr old Team Harmony’s “Ornellaia” by “For Pleasure”.

“I’m pretty surprised to be back on top off the podium, to be honest. I didn’t think I’d win the first CSI4* GP, let alone win this one.” Peter went on to tell us that the partnership with the mare is a new one and this circuit is their International debut together, and “it couldn’t have been better I really can’t be believe it.  The mare gave everything today, I was pretty tight to the time in the first round, but we got away with it and we really made sure we went for it in the second round and got the win.  I really must thank Team Harmony and Princess Haya Bint al-Hussein of Jordan, for having trust in me and for giving me these good horses and this chance.  Without their support none of this would have been possible. It has been six weeks here with 11 horses and we have got so much work done and found out who the horses are and have had time to gel with them, especially this mare, and we are really set up now to go on with the season.

Their winning time was 47.08s and just 0.16 of a second slower was his compatriot, Anthony Condon and “Sfs Aristio” taking second place.  The young Irish rider Susan Fritzpatrick took third place with a very neat fast round on “Fellow Castlefield”.

The course designer Javier Trénor jokingly remarked,“How curious that both the Grand Prix classes I have designed were won by Peter Moloney!”

The 1.45m, Invitational Medium Tour, was sponsored by Horseware, who supplied all of the rugs that were given as prizes during the Tour. This class was won in 37.04s, by Kerry McCahill from the USA on the 11yr old “Westbrook” by “Jaguar Mail”.  They beat off 38 other competitors from which only 9 got through to the jump off.  Second place was taken by the Belgian rider, Stephanie Andries with “Javenia” in 37.58 and the Taiwanese rider Isheau Wong was third on “Jussica T”.

The British National anthem was played for Kayleigh Watts and “Kilbarron Rue” winners of the Ladies Invitational GP sponsored by Selleria Equipe.  There were 10 riders in the jump off and her winning time was 39.76s. This is her fourth victory here at the Tour on this mare.  Second place was for another mare “Viva” ridden by the young Candian rider, Kara Chad who has been training with Eric Lamaze since 2015.  Despite her youth she was the reserve team rider for Canada, for the 2016, Rio de Janeiro Olympic games.  The stylish American rider Catherine Pasmore and “Carmela Z” took a well deserved third place.

Nicola Pohl, from Germany had a brilliant win in the 1.30m, Invitational Small Tour with her 9yr old, KWPN mare,“Florida Van Maarle”. Jay Halim (GBR) was second riding “Abrisco”, and the Spanish rider Pepe Garcia Diana on “Chaccdino” was third.

With these results the 25th Sunshine Tour for 2019 draws to a close.  With 510 riders from 45 countries it has truly been an international celebration over the last six weeks.  1,689 horses have competed across 240 classes and €1.350.000 of prize money has been won.  28 FEI, Longines Ranking classes have been held with 4 qualifiers for the European Championships and 5 for the Junior European Championships.

An important week of competition began today for the Young Horses

An important week of competition began today for the Young Horses