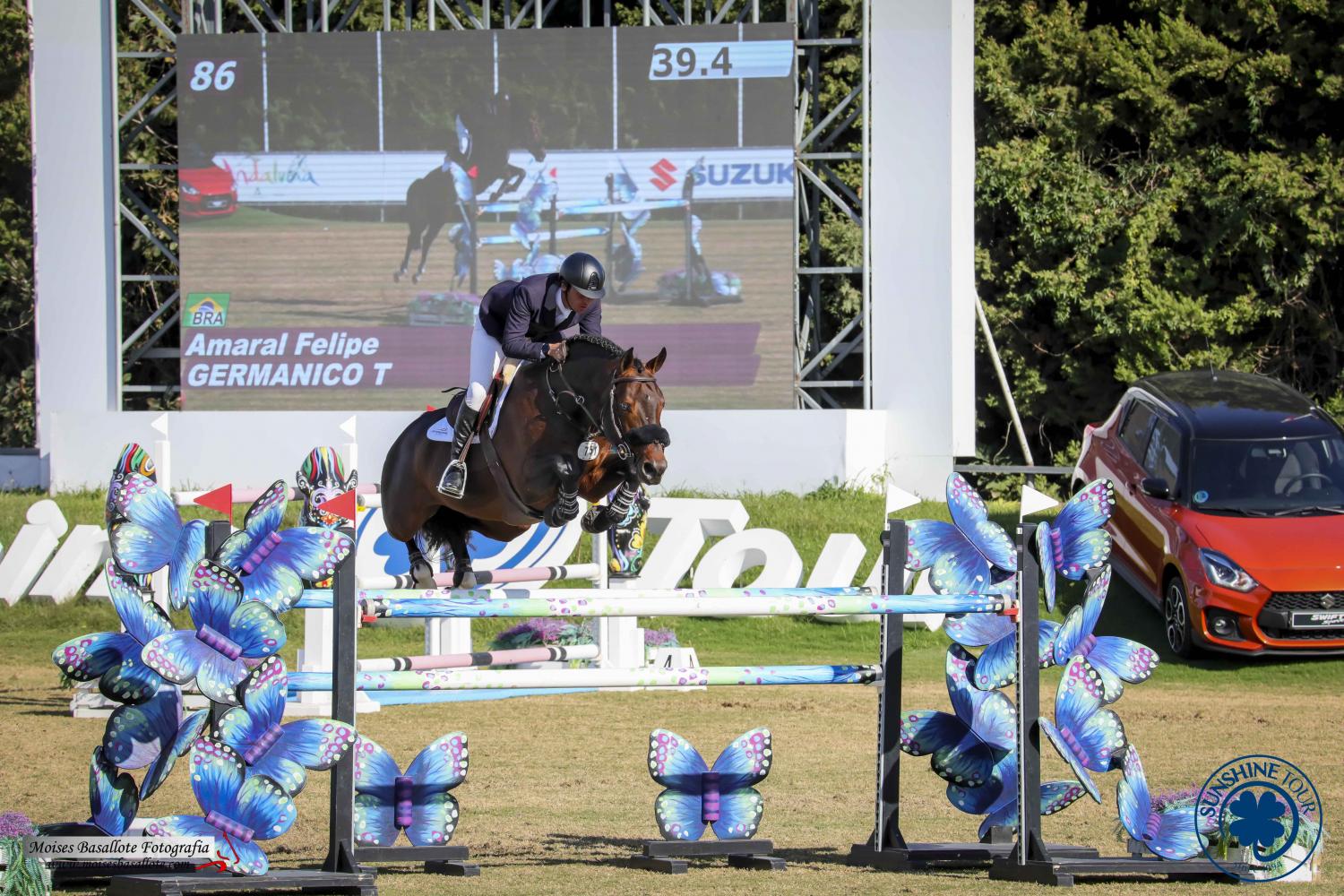 The showgrounds are open to the public so if you can, do come and watch the impressive 1.50m Grand Prix of Andalucia and see some of the top riders and horses in the world competing in the flesh.

Today the Longines Ranking class was sponsored by La Equina, this Big Class was set at 1.45m and run under table A (FT).  The course was designed by Cédric Longis and consisted of 12 fences with 14 jumping efforts.  Overall, the course rode well with faults spread throughout and with many riders using the class as a preparation for next  weeks Nations Cup round.

Early to go in this class was Laura Kraut, who was part of the Silver medal winning USA team in this year’s Tokyo Olympics.  It was clear that she started off her round with the very neat jumper Galliano VM, with a view to win.  This was clear from the very first sharp rollback early on the course, into a double, her turn was sharper than any rider before her and barely matched by any after her.  Laura came in just under 20 hundredths of a second faster than the then leader, who was Matthew Sampson with Connecticut (GB).  It appeared that the two riders were going to top the podium and when there were only three riders to jump everyone thought the results were cut and dried.

Until, with just three riders to go from the 81 participants, the very talented Brazilian rider Pedro Veniss came in to the arena and absolutely flew around the course in very nearly, a second less than Laura.  Pedro was riding Nimrod de Muze Z and it really looked like these two would be our winners today.  Las to go another Brazilian rider, Felipe Amaral came in to the ring on the 14yr old Germanico T who a KWPN and is by the fabulous stallion.  From the start-line these two absolutely gave it their all, they were extremely fast, quick around the corners with rapid get aways after each fence and in the end they took almost another second off of Pedro’s time leaving Laura almost 2 seconds down and in third place.

Laura Kraut is Ranked number 17 in the world at the moment and her ranking keeps improving.  Today she also added another second place to her records in the 1.40m class, with the KWPN 9yr old mare, Haley. This mare is by Quality Time TN and came in behind the very successful Israeli rider, Regis Villain who added yet another win to his the two he already has so far at this October Tour.  Today he was riding the 10yr old Berline Cece who is by Ustinov.

It was a British top two in the 1.35m Medium Class.  The competitive rider Eleanor Hall Mcateer had a great day and was first with Hello Franklin, this is their very first international win together.  She beat off fellow countryman, Joseph Clayton who today was riding the 10yr old Unex Garcon de Lui, this horse was competing here last week with Tim Gredley.  Kim Emmen took third with Giorgino 4.

Commandant Geoff Curran (IRL) and Kateryna Downer (UKR) repeated their wins in the 1.30m and 1.20m classes with Dowth Hall and  Excel, respectively.

Once again Spanish riders took the top two places on the leaderboards in the Young Horse classes.  The winner was Iván Serrano in the 6yr olds, with Cormira By P&S Z who is by the amazing stallion Cornet Obolensky.  Second was Antonio Mariñas with Kingston Express. There were 70 entries in this 6yr old class which was held in the geotextile ring and 35 entries in the 5yr old class which was on grass. Jose Antonio García Diana once again took the top spot in the latter class with Claddagh Hesa, by Clarimo-Holst, and Mariano Martínez Bastida with Sherlock was second.

The CSIO3* ends tomorrow with the Grand Prix of Andalucia which begins at 14.30h. Overall there are 8 classes running here tomorrow as we finish off a very busy third week of competition.  Excitement is rising as the riders and spectators look forward to the next week of competition and the Nations Cup round.  You can watch live on the Sunshine Tour App, the official channel ClipMyHorse.TV and our web site.