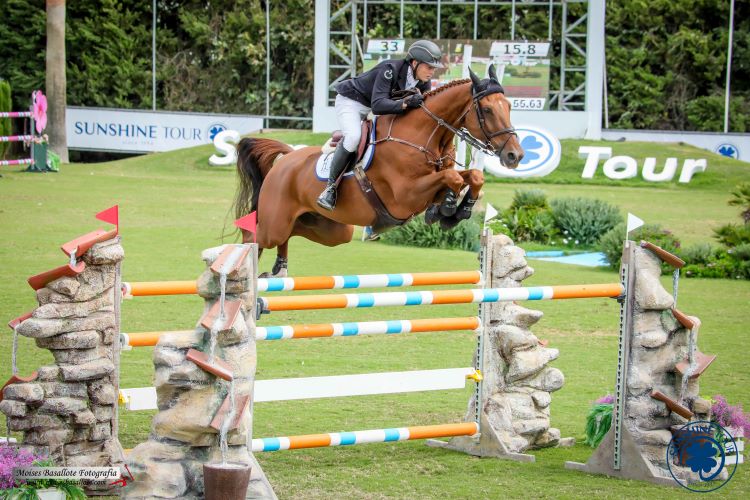 The Winners of the 1.45m Longines Ranking class were British pair James Wilson with Galway Bay Jed by Romanov from a Lux mare and owned by Rupert Nuttall.  This pair have really improved in this class over the Autumn Tour so far.  Today they won this one round, ‘fastest time’ class in 55.54sec and beat Irish rider Conor Swail riding Flower into second place with 55.63sec. Flower is by Bon Ami, out of a Randel Z mare.  Third place was taken in 57.35sec, by the New Zealander, Bruce Goodin riding Backatorps Danny V by Quasimodo Z, out of a Lupicor mare.  The class was held in the main, grass arena named after David Broome and there were just over 40 entries.

Kayleigh Watts stepped up from yesterday’s 1.35m class today but she repeated her win in the 1.40m Big Class A.  Once again she was riding the mare by Chatman, Kimosa Van Het Kritrahof and won the class in 54.36sec almost a second faster than her compatriot the British rider Charlie Jones who came second in 55.25sec on Klee Hellerman’s gelding, Clintofino.  In third place was Michael Pender for Ireland, riding the lovely mare owned by Marion Hughes, HHS a Touch of Class.  John Whitaker was aso in the rosettes coming in fourth on Sharid.

The 1.10m class was won by the German rider Natalia Appendino with Millfield Cliche; second was the Spanish rider, Miguel Antonio Valdés with Fredo and finally in third was the American rider Ariana Rockefeller with Captain Morgan 35.

The Young Horse 7yr old class was won by another Irish rider, Billy Twomey with Je T’Aime Z, this gelding is by Je T’Aime Flamenco, out of an Indoctro mare and is owned by Karel Cox Horses; this is their second win in this class.  Laura Kraut rode, Seleste B Z into second place, the mare is by SpartacusTN, dam sire Chardonna and is owned by Vof HX Horses.  Antonia Andersson from Sweden was also successful again today as she came in third with the mare Dyneine de Lilau.

Spanish rider José Fumero was the winner of the 6yr old class with Michael Potter’s, Esto de Viscourt.  American rider Julie Welles was second with Jacquard by Kannan from an Indoctro mare and in third was Charlie Jones, riding Just Synergy by Arko and from a Kannan mare.

The 5yr old class was won once again by Charlie Jones and Nolo Contender, this pair have repeatedly won and been highly placed in this class throughout the Tour so far. Swedish Linda Heed with De Vil T were second, this pair have also won the class twice before and been highly placed throughout.  In third were another very successful pair made up of the American rider Molly Hay and Kiek Now S.

This is the third week of the CSI3* Autumn Tour here at Montenmedio.  Tomorrow there will be seven classes over the course of the day and the week will finish on Sunday with the top riders competing to win the highlight of the week, the GP class, a qualifier for the 2021 Tokyo Olympics.