Chris Burton, top Australian eventer wins both 7YO classes one with ´Chedington Blue´ and the other 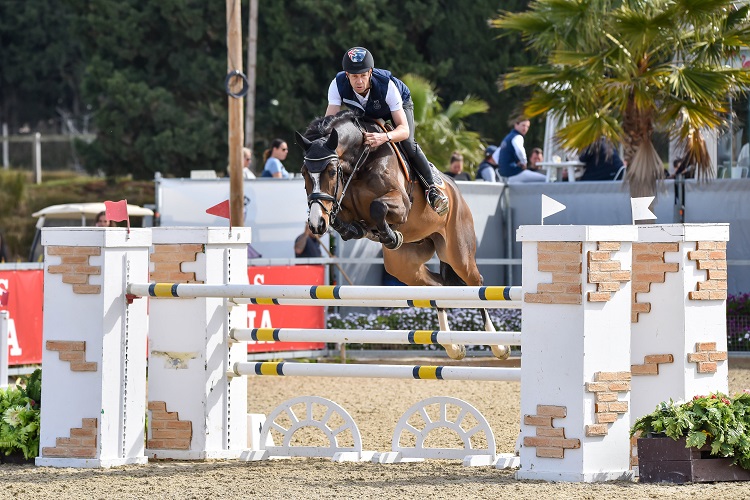 Irish rider, Sean Monaghan continues his winning streak here at the Andalucía Sunshine Tour, in the 6YO class with ‘Cornet Clover Girl’

Australian International eventer, Chris Burton, who is renowned as the fastest cross country rider in the world, was clearly just warming up yesterday.  Today he won both of the 7YO Young Horse classes.  He stepped up from yesterday’s third place to win today with ‘Chedington Blue’, who is by ‘Balou Du Rouet ‘, dam sire ‘Contendro I’.  He then won the other class, with ‘Kennedy HX’, a Holsteiner by ‘Vittorio’, dam sire ‘Bustique’ from ‘Indoctro’, who was 9th yesterday.  This two time Olympian rider is well known for carefully bringing on young horses, with regular attendance at the Le Lion d'Angers, Eventing Young Horse World Championships and we are delighted to see him here, once again starting off his season with us at the Andalucía Sunshine Tour.

In the first 7YO class, second place was taken by Bianca Babanitz (AUT) with the really lovely mare ‘Bella E Impossible BBA’ a pair that have been amazingly consistent here.  In third was Adam Botham (GBR), once again with a great result from ‘Cerano Van de Dijkhoeve Z’;  in fourth was the Bulgarian rider, Konstantin Van Damme with ‘Kilnaboy Captain’, another regular pair in the top five;  and in fifth, was Kendra Brinkop (GER) repeating yesterday’s result with ‘I’m Fancy VDM Z.

In the second 7YO class, British riders took second, third and fifth places.  Second was Mark Wildish with ‘Karim EBH’; third and fifth respectively was, Nicole Lockhead Anderson riding ‘Pikachu TW’ and then with ‘Diatencona PS’.  In fourth was a Spanish rider, well known here at the Tour, Mariano Martínez Bastida with ‘Falbala Pironniere’.

Sean Monaghan from Ireland hasn’t really stopped winning here at this year’s Andalucía Sunshine Tour 2022.  After topping the podium yesterday in the 7YO class and winning the 1.45 class last weekend, he added another top spot today in on of the 6YO classes, with ‘Cornet Clover Girl’, who was the Winner of the Farewell YH classes in the third week.  In second was Faye Sutton (GBR) with ‘Billy Hepburn’;  third was José Fumero with ‘Granit de Conques’;  fourth was Bianca Babanitz with ‘Chicago Freestyle’ and once again in fifth, was Kendra Brinkop with ‘Oak Grove’s Heartthrob’.

The second 6YO class had a Spanish winner, Jesús Bamonde with AGR Toronto’;  second was Eoin Gallagher (IRL) with ‘Sure D’Elle Z’;  third and fourth places were taken by  Dutch rider Kim Emmen, with ‘Lakoniek’ and ‘Hercules’;  in fifth was the Polish rider,  Marek Lewicki with ‘Fiston de Bo Z’.

One of the 5YO classes had a British top two and the other Spanish top two!  In the first, Ronnie Jones took the win with  ‘Ruinart Rose’ and Olivia Gent, was second with ’Avant Garde HST Z’.  In third was a Belgian rider, Louise Joassin with ‘Lovely LJ’.  Another British rider took fourth, Louie Cunningham with ‘Colossus HD’ and in fifth was the Spanish rider, José Fumero with ‘Intina del Maset’.  In the other class,  Carlos Bosch was the winner with ‘Mega Coupe’ and in second was Marta Garat with ‘Nasa del Amor’. Irish rider Ivan Dalton took third with  ‘Romelus de Muze’;  Kim Emmen was fourth with ‘Aga Blue DMH Z’ and Bianca Babanitz fifth with ‘My Boy Elvis’.

The Young Horse classes continue tomorrow alongside the CSI4* and the CSI1*. there will be 11 classes in all, jumping will begin at around 09:00 and continue until about 17:00.  The whole event is kindly sponsored by the Consejería de Turismo, Regeneración, Justicia y Administración Local de la Junta de Andalucía.