David Will and Forest Gump 29, once again win 1.45m Ranking Class for Germany 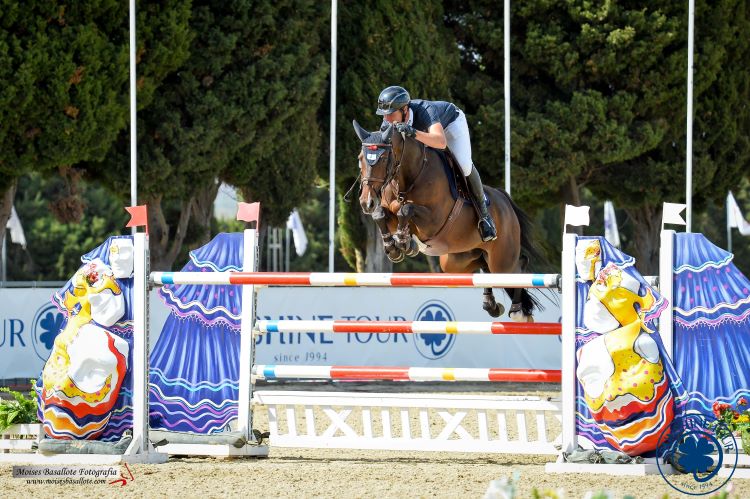 David Will and Forest Gump 29, once again win 1.45m Ranking Class for Germany

This wasn’t the only top three placing for Laura Kraut today and she continued her run in the rosettes at this Autumn Tour by winning the 1.40m, Big Class A. Once again she was riding the very consistent Greatfull who just keeps improving her results.  The mare is also owned by Cherry Knoll Farm and is by Congress 4. This pair have already been 3rd and 2nd second in this class and today they topped the field of 51.  Just tenths of a second behind was Michael Pender with HHS Catwalk, also owned by Bravo Hughes Ltd and in third place was the Spanish rider Iván Serrano with Rain Man.

Amy Graham from Australia with Calorie VH Marienshof Z and Spanish rider Ainhoa Manero on Fortín, were the joint winners of the 1.30m, Medium Class A, both finishing on 23.96sec. In third place was another Spanish rider Jesús Garmendia with Llain de Llamosas.  Michale Pender was also successful in this class coming 4th with HHS A Touch Of Class.

The Small Class B had a Spanish top three, the winner was Alejandro Álvarez who also came third, winning with the grey gelding Califa SQ and taking third with Little Chap. Fernando de los Santos was second with the mare, Isba Chap S .

In the 1.10m, Cornelia Bordier (SWE) riding Ibesi Cooper was the winner with two American riders in hot pursuit behind her.  Ariana Rockefeller was both 2nd and 3rd on Caelle and Chiccadella (resp’) and in 4th was Molly Hay with My Uno Des Pouplis.

The Young Horses also jumped today finishing off their week here at the Autumn Tour.  Laura Kraut rode the very special gelding, Diadem du Thot who is owned by Stars and Stripes, to the top spot in the 7yr olds.  After being 3rd twice this week in this class everyone was very satisfied with these results. Today the pair stopped the clock in 55.54sec with the British rider Charlie Jones, once again having to make do with 2nd place with Vins VD Tojopehoeve Z in 57.72sec.  The egyptian rider Sameh El Dahan with WKD Little Star took 3rd place on this gelding by Quick Star, owned by Sycamore Horse Farm.

David Will was once again the winner of the 6yr old class with the lovely Junior Kannan, repeating yesterdays results. The successful British rider Olivia Skinner  did not disappoint and continued her good results for this week with Jobijn who took second place and Costa Del Sol B Z who was 4th.  Julie Welles from the USA rode Jacquard in to 3rd again keeping adding to her successful results so far in this Autumn Tour.

Competition continues tomorrow with more than 300 horses taking to the arenas.   Five classes will take place building up to the climax of the week on Sunday when we are once again holding a Longines Ranking and 2021 Olympic qualifying Grand Prix.