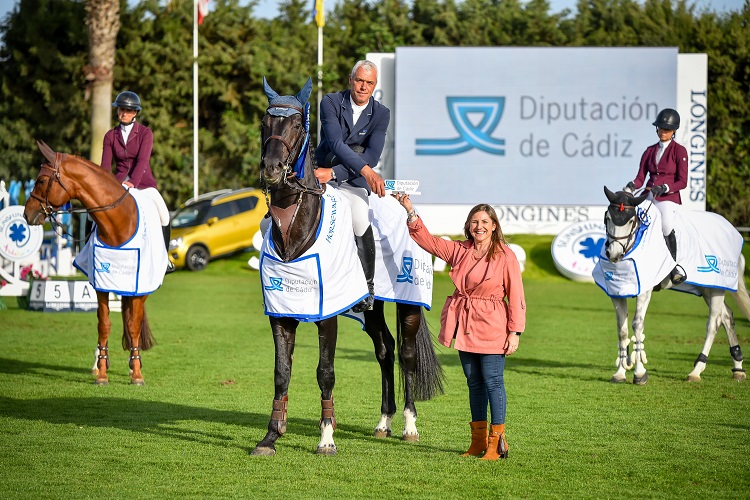 and for New Zealand,  Bruce Goodin is once again on top of the podium with ‘Backatorps Danny V’ in the third Ranking class of the day here at the Andalucía Sunshine Tour.

In the 1.50, Diputación de Cádiz Trophy, Longines Ranking class today, there were 80 competitors from more than 10 countries competing and just 17 jumped clear in the first round and moved forward into the jump off. The well known Belgian rider,  Dominique Hendrickx, who is currently ranked 154 in the world, and is a regular participant in the World Championships at Lanaken was our winner. This rider has had two other big wins here at the Tour already, one being the 1.50, CSI 4* Ranking class here on the 18th of February with ‘Koriano Van Klapscheut’, another in the Small Tour Grand Prix, with ‘Vintadge de la Roque’  and has also been very successful with his Young Horses in the 6YO classes. Today he was riding ‘Floris TN’ who is a very athletic, dark bay stallion, KWPN, by ‘Quality Time TN’ with the dam sire ‘Vancouver’.  He was bred in the Netherlands by H. Breukink, Vorden and is now owned by Jamal Rahimov & Karina Rotenberg but was previously with Team Nijhof & Jan Breukink.  Dominique  took on the ride in November last year and this has been their first major show together. With today also being their best result so far here at the Tour, last week this pair, who were clearly just warming up, were third in the Big Tour 1.50.  Great results all round for this very talented Belgian rider.

Dominique and ‘Floris TN’ stopped the clock in the jump off in a mere 39.02 seconds and hot on their heels was the Swedish rider, Marcus Westergren who has also had a really successful Tour.  He was riding ‘Hurry Up G’ (Bernini x Berlin), and stopped the clock in 39.13 seconds, closely followed by the British rider,  Ellen Whitaker with ‘Spacecake’ (Stakkatol x Kannan) who was third in 40.66s.  One of our top winners here, French rider, Penelope Leprevost was fourth, riding ‘GFE Candy de Nantuel’ and in fifth was the Danish rider Tina Lund with ‘Carallo’.

The prize giving ceremony was carried out by the ‘Diputación Provincial de Cádiz’, with Irene García handing out the trophies, accompanied by the Provincial Culture Deputy, Antonio González and the Provincial Sports Deputy, Jaime Armario.

In the Hipotels sponsored, Small Tour Grand Prix we had a very impressive win from Jason Foley, who is a regular presence on the Nations Cup team for Ireland.  Today he was riding ‘Keatingstown Z Wellie Two’, a bay, Irish Sports Horse bred by Sharon Fitzpatrick.  The horse is by ‘Z Wellie 71’ from the mare Marchionesse who has no registered breeding.  This lovely horse was brought on as a youngster and later competed by Susan Fitzpatrick and, also occasionally ridden by Gerard O’Neill, both for Ireland.  Jason took on the ride back in last November and has been forming a partnership with the horse ever since,  his efforts clearly  came to fruition today in this demanding class.  Flying around the jump off, these two stopped the clock in 40.08s.  An absolutely untouchable time, indeed in second place was the Olympic rider Eduardo Álvarez Aznar (ESP)  with ‘Full Option Van’t Z’ who finished in just under 4 seconds behind, 43.58s.  In third was Hendrik-Jan Schuttert for the Netherlands with ‘Good Farming HS’;  in fourth was Spanish rider Carlos López-Fanjul with ‘Ashaane Villa Rose’ and in fifth another Irish legend,  Billy Twomey with ‘Vagabon des Forets’.  The Director of the Hipotels Chain,  Gabriel Bover, alongside Mari Carmen de la Cruz, the director of  Hipotels Gran Conil Hotel,  gave out the prizes.

In the last of today’s Ranking class, the  Medium Tour 1.45, Bruce Goodin from New Zealand was the winner with ‘Backatorps Danny V’ (Quasimodo Z x Lupicor).  The class was jumped in the HIckstead grass arena.  Bruce stopped the clock in 39.06s with  Michael Pender (IRL) and  ‘Nando Quality’ coming in behind in 40.16s.  Hot on their heels was Latvian rider, Kristaps Neretnieks with ‘Valour’;  Richard Howley (IRL) was fourth with ‘Fame’ and  James Whitaker (GBR) was fifth with ‘Caloro EX Z’.

Kristaps Neretnieks was also the winner of the Big Tour 1.45, this time with ‘Ethos’, and the Big Tour 1.35 was won by Maximilian Weishaupt (GER) with ‘Friday for Future’.

In the 1.40 Medium Tour Kevin González de Zárate (ESP) had the fastest time of the day, 55.10s, and was a very popular winner with ‘Enji du Barquet’. The class was so well attended that there were two sets of placings and the other first place went to Brazilian rider Pedro Junqueira in 57.12s with ‘Chief Tibri Z MFS’.  The Medium Tour 1.30 was won by the Swiss rider Charlotte Barbey with ‘Balou’s Bijou N’, finishing well ahead of all the other competitors.

These are the main results on this penultimate day of the Tour and the rest of the results are available on out web site and usual media outlets.  Tomorrow we finish the Tour with five Invitational classes.  The first class will be the Final CSI1*, at 09:30 in the Milton arena, 5.  Later at 12:30 the 1.40-1.45 Ladies Invitational will also be held here.

In the Main arena, David Broome, the Invitational Small Tour will start at 10:00 and the Longines GP final set at 1.55-1.60 will start at 14:30.  In this class only the 50 most successful riders of the whole Andalucía Sunshine Tour will be able to compete and prize money totals 148,700 euros.  The course will be designed by the Italian Uliano Vezzani and you will be able to see the course plan on our app tomorrow.