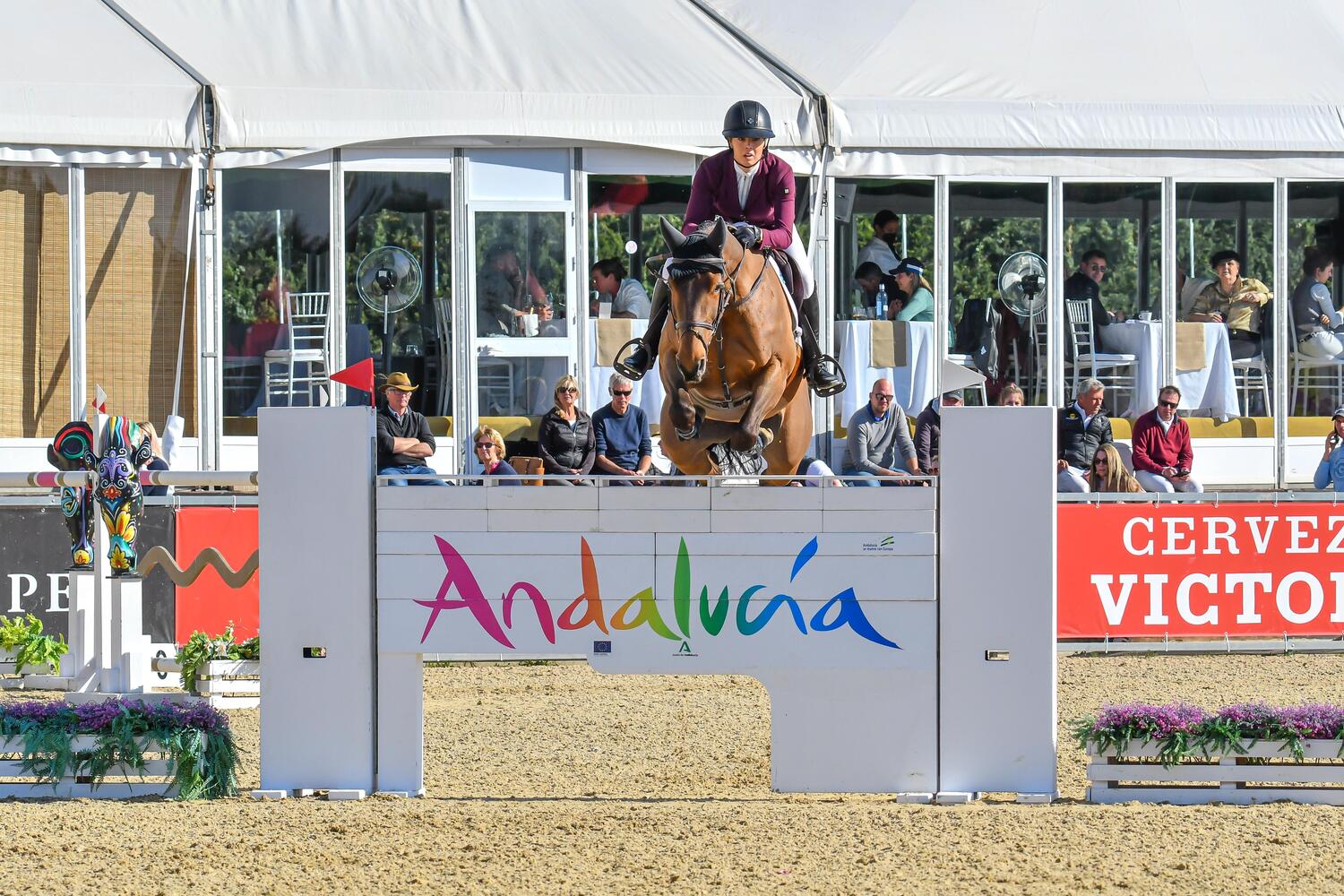 Once again the Whitaker surname is right at the top of the podium here at the Andalucía Sunshine Tour.  As William started off the week by  winning the big class on Thursday, today it was Ellen who absolutely steamed around a very difficult jump off, beating a very strong field to win the Ayuntamiento de Barbate 145 Grand Prix.

21 riders got through to the jump off in this demanding class and the top 5 in the final results, were separated by barely a second.  Mariana Frauches Chaves from Brazil was early to go in the jump off with the mare ‘Emerette’ and she rode a fast and accurate round, setting the time to beat at 40.83 seconds.  Those to come were really chasing this very fast time, and some came very close.  Second last to go, was Ellen Whitaker with the lovely little mare ‘Fiona des Hayettes’ (Lord des Hayettes x Ryon D’Anzex).  And what a round she rode!  The crowd were cheering her on as she flew towards the last Suzuki upright, the clock ticked down to stop at 40.69 segundos and she went into first place, much to the delight of the audience.

Third place with a great round, was the German rider, who has already been so successful here Kendra Claricia Brinkop with ‘Do It Easy’ in 40.96s and in fourth was Michael Hughes from the USA with the lovely ‘George Z’ in 41.09s.  Olympic rider, Holly Smith was fifth with ‘KBS Major Player’ in just 41.67s.  Brilliant jumping from all involved!

Ellen Whitaker and ‘Fiona des Hayettes’ have already won a big class here, the 4* 145 Medium Tour back on the 25th of February.  Today Ellen told us she was delighted with the mare and she ‘only started to ride the her last autumn’ but they were immediately jumping clear and won three classes in a row, going from 135 to 145m.  ‘The mare is small and like a pony in the stables and easy to be around ’  Ellen also told us that she doesn’t have any long term plans with her or any of her horses for the year and likes to ‘let them direct their paths as they develop’.  Ellen plans to rest ‘Fiona’ next week and then do a couple of 150 classes, see how she goes’, and aims to ‘ride her in the Invitational GP at the end of the Tour’.  She also enjoys competing here as ‘the facilities are excellent with a lot of different arenas and that the horses can grow in experience as time progresses’ and that ‘the new indoor arena is a great addition to the facilities,  it was just what was needed here at Montenmedio’.

In the 1.40 class, there was a British top two on the podium, with Tom Monaghan and ‘Luttoria’ beating Adam Botham with ‘Arge’ by over two seconds.  Successful Spanish rider Carolina Aresu García Obregón was third with ‘Princesa Des Fabries’.  In fourth was another British rider, Joseph Clayton with ‘Hobalo’.  Swedish rider  Marcus Westergren took both fifth and sixth places,  with ‘Fellaini de Liebri Z’ and ‘Crunch Air’ resp’.

Daniel Lahmann for Germany with ‘Araconti T’ was the winner of the 1.35,  Mario Rotllant Daurella for Spain was second with ‘Cerano’.  British riders took the next two places with, Sophie Evans in third with ‘Happy-Fomia’ and Graham Gillespie in fourth with ‘Jirado Van’t Koningshof’.

The top two on the podium in the 130 were also British, James Whitaker with ‘Rumbolds Warriors Echo’ in 34.54s and in 37.28s Ava Vernon, took second place with ‘Here I’m B’.  Sonsoles Lasaosa Astier was third for Spain, with ‘Tresor de Laume’ in 39.36s.

There was a Swedish win in the 1.25 for Therese Lilje with ‘Juloo Castanoo’;  Spanish rider, Leticia Rodríguez Mesonero with ‘Baccarat de Lasca’ was second and German rider, Lea-Sophia Gut third with ‘Balounette DW Z’.

In the 1.10 there was yet another British winner,  Victoria Kuligowski with ‘Germates’; second was the Dutch rider,  Amy Van de Pol with ‘Tenor D’Elle’,  and the American rider Kate Van de Bovenkamp, took third with ‘Kvint’

The event which is kindly sponsored by the Consejería de Turismo, Regeneración, Justicia y Administración Local de la Junta de Andalucía,  starts up again on Tuesday 8th March.  The Young Horse classes will begin our week here and the 5, 6 and 7yo will have their first chances to jump a clear that will be counted towards qualification for the Young Horse Finals on the 23rd of  March.