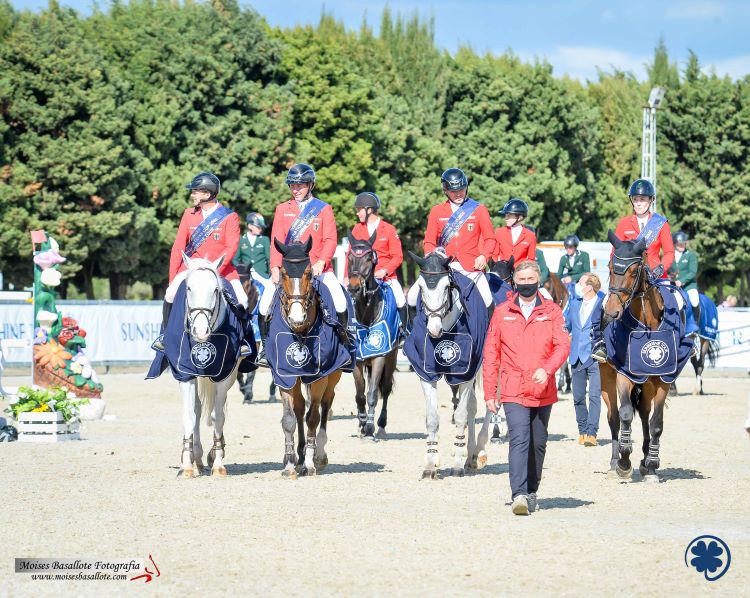 The German team made up of Janne Friederike Meyer-Zimmermann riding Chesmu KJ; Marc Bettinger riding Undercover Z; Maximilian Lill with D-Cassina and David Will with C Vier 2 were the winners of the Nations Cup, held this morning at the Sunshine Tour.  In the first round David Will and Janne Friederike Meyer-Zimmermann jumped clear for their teams with Marc Bettinger just having one pole down and Maximilian Lill having two. This left the team score on just 4 faults as they went in to the second round.

With seven other brilliant teams in the second round, the game was clearly not over as they were up against the likes of Ireland who had three clears, Denmark on 2 faults for time and Brazil who were on just 5 points.  Stepping up to the task, three of the team jumped superb clears and with Maximilian Lill’s score of 16 faults being the discard score, the team finished on a mere 4 faults.  The team were delighted  with their win and their Chef d’equipe, Dietmar Gugler was thrilled with the result as Germany is clearly on great form as they also won the last round of the Nations Cup that was held this autumn in Vilamoura, Portugal.

Ireland were favourites to win early on as three of their team members went clear in the first round and Denis Lynch did not have to jump.  The second round did not go so smoothly but up to their very last rider they were poised to take on Germany in a tiebreaker jump off.  Unluckily the last to go, Denis Lynch on Cristello jumped a foot perfect round but popped in to the water jump rather than over it and their chances were dashed.  That said Mark Mc Auley and Jasco VD Bisschop had two perfect clears;  Michael G Duffy with Lapuccino 2, had one pole in the second round as did Cameron Hanley with ESI Toulouse.  Michael Brake was the Chef D’equipe.

In the end Brazil had to count 5 faults from each round but Marlon Modolo Zanotelli rode two clears with VDL Edgar M and the team finally finished in fourth place on 10 points.  Sweden finished in fifth place on 12 points, the star of their team today being Fredrik Jönsson with Cold Play who had a double clear.  Egypt were equal fifth also on 12 points, with the wonderful rider Abdel Said jumping two of the most beautiful clear rounds of the whole event on the lovely Jumpy Van de Hermitage.  Morocco was seventh with a sum of 14 and Portugal was eighth with 25.

Individually the top 30 riders in the event have also qualified for tomorrows Big Grand Prix class, first was Rodrigo Giesteira Almeida from Portugal with GB Celine, second the Belgian rider Nicola Philippaerts and Katanga V/H Dingeshof and third David Will with C Vier 2.

Alongside the Nations Cup, the show continued as usual today. In the CSIO3* 1.50m Ranking class, Abdel Said once again rode a foot perfect round. This was a speed class and he stopped the clock in 62.60s this time riding Alanine de Vains.  Hot on his heel in 62.89sec was Jur Vrieling with El Rocco for the Netherlands and the Irish rider Conor Swail was third with GK Coco Chanel.

The CSIO3* 1.45m was won by Italian Luca Moneta on Etoile VD Wijnhoeve Z. In second place was Irish rider Michael Duffy with My Way B & V and Tim Wilks took third place for Canada with Dauwdruppel T & L Z.

The 1,40m was won by the Egyptian rider Mohamed Talaat with Tabea 20.  The Spanish rider Jesús Torres García with Orphee du Breche was second, and third was Swiss rider Faye Schoch with Essex.

Lastly in this CSIO3, the 1.35m class was won by Norwegian rider, Ingrid Gjelsten with Violetta D, second was Marc Bettinger with Viconte de Baerenrain and third this time, was Jesús Torres with Grupo Prom Numerus.

In the CSI2*, the 1.40m was won by the French rider, Guillaume Foutrier with Cleverboy; British rider Kayleigh Watts with Kimosa Van Het Kritrahof was second and in third was the Norwegian rider Ingrid Gjelsten with Jackson VD Bisschop.

The 1.35m class was won by Dutch rider Henk Van de Pol on Cash Sent, he stopped the clock in 30.96s, with around 3 seconds in hand over Antonio Mariñas Soto who took second with Luxalike in 34.04s.  Mariano Martínez Bastida with Cash du Rozel was third.

The Dutch rider Kim Emmen continued her success today taking both top spots on the podium in the 1.30m class with the wonderful Warriors Glory winning and Lady Angeles taking second place whilst another rider often in the rosettes here, Linda Heed from Sweden, took third place with Heart to Heart.

Czech rider Kristina Vitek was the winner of the 1.20m class with Kamirez Van Orchid’s; second was Spanish rider Lara Cristina Diego Gutiérrez with Actor de Pravia and in third, was the Japanese rider Satoshi Hirao with Dolce Vita.

The 1.10m was won by the French rider Heloise Mercier with Arko’s Girl Z; second was another Czech rider, Anna Marie Vitek with Mateo di Belle and third was Anastasia Nielsen from Monaco with Donald de Bacon.

In the CSIYH classes Ciaran Nallon for Ireland won the 6/7yr old class riding Cara PS by Carthargos and owned by Paul Schockemöhle. Gaj Riossa from Slovania took both top places in the 5yr old class today winning with Kaylinde by Zirocco Blue VDL and second with President CL by Harley.

The Autumn Tour ends tomorrow the 29th with 11 classes, including two Longines Ranking classes and the Big Grand Prix class as the highlight of the day.  This 1.50m class is a qualifier for the Tokyo Olympics in 2021. You can follow all the action live on our website.