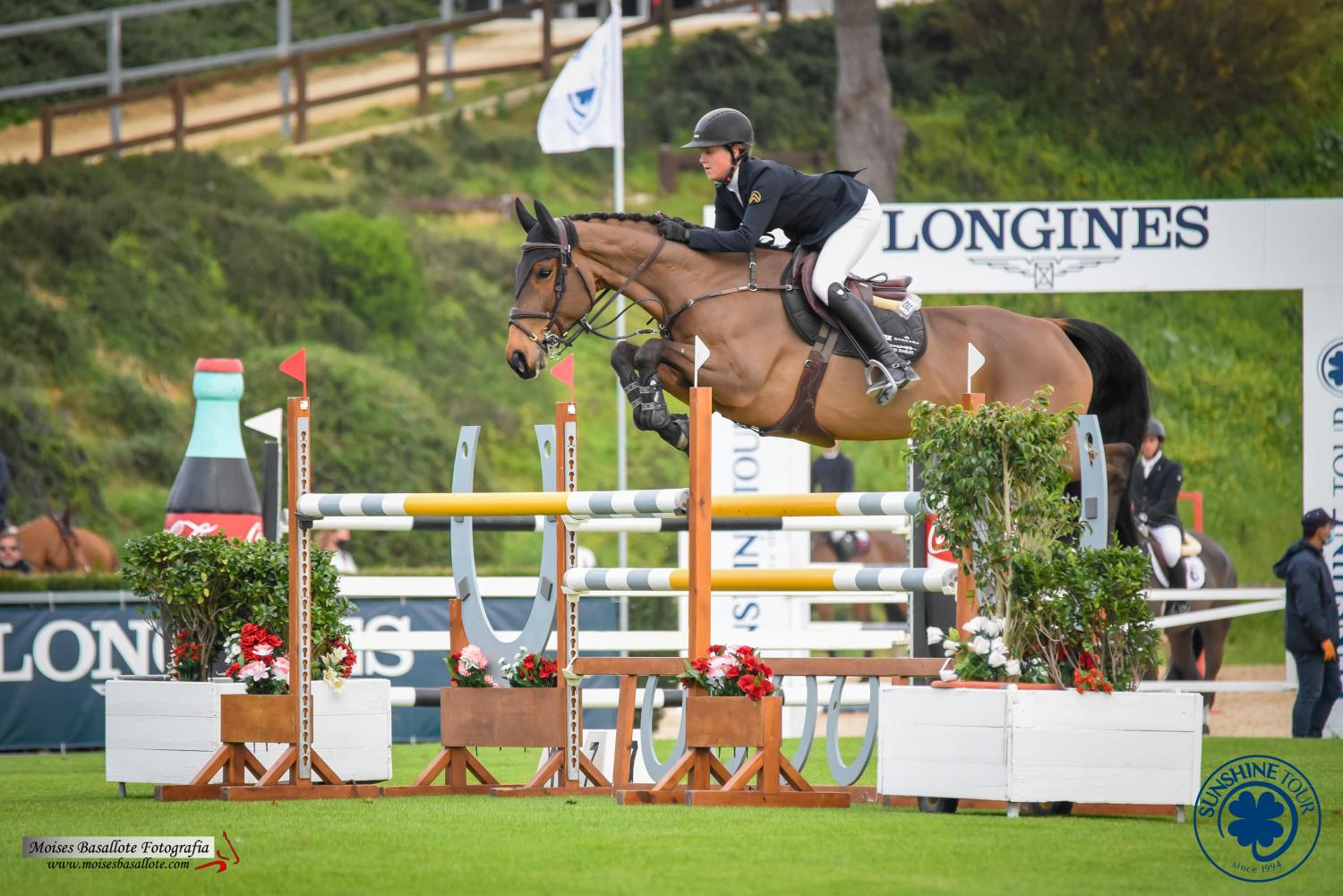 The 5yr old Final finished at midday today and the quality of the Spanish participants was clear for all to see.  With 19 horses out of 47 participants, passing thorough to the jump off, the class ended up with Spanish riders taking the top two spaces.  Despite the day being sunny here in Vejer de la Frontera, there was a very strong and gusty wind which tested both the course builders and the concentration of the youngsters.

Coping well with the atmospheric conditions from the 19 clears in the first round, 16 horses also went clear in the jump off; with the exception of Aniek Diks riding “Landreau” who decided not to take part.

The winner of the 5yr old Finals in a mere 26.95s, was “Cholita JFC”, a grey mare ridden by her owner and breeder, Javier González Fraga who actually saw her being born.  This was not the only horse here bred by Javier who did very well today.  Another of his homebreds, “Sonic JFC”, was 5th in this class, jumping two lovely clear rounds.  This is a very talented horse who has had 6 clears from the 8 rounds he has already jumped here at the Tour.  Javier told us:  “I couldn’t be happier.  I know that it is very difficult to win classes here at the Sunshine Tour and this year, I have already won four!  Two in the Main arena which is always more exciting, one in the 5yr olds and now the Final of the 5yr olds!  It’s extremely wonderful!  As well as this both “Cholita” and “Sonic” are homebreds.  I couldn’t be happier!”

Javier commented further on the class for us: “I knew that there would be a lot of clears.  In this type of class you don’t have very technical or difficult courses, in the jump off, the fastest round wins.  With “Sonic” I tried to do less strides in each of the related distances, he is a very big horse.  When Mariano went into the lead I thought it was going to be extremely difficult to go as fast with “Cholita”.  Its a big arena and small horses like my mare find this more difficult… but, I took a risk on one turn where I saw there was a faster option, went for the first distance to the fence that I saw, and I won!”

In second place was Mariano Martínez Bastida who is from the Murcia.  Despite arriving at Dehesa Montenmedio last week, Mariano managed to qualify for the Final with “Sherlock”  who is a Spanish sport horse (CDE), owned and bred by Luis Álvarez Cervera.  Mariano only began to ride him in January.  Mariano told us: “The horse is very rideable and a very clean jumper.  He gives you a great feeling on top.  It was his debut show here and he is getting very good results.”

In third was “Gilly Express DKS”, a  French sportshorse by “Diamant de Semilly” with the dam sire“Baloubet du Rouet”.  This mare has jumped 8 classes so far and gone clear 7 times. Her rider Manuel Thiry, is from Belgium and rides for Gregory Wathelet.

The 6yr old Final was held on grass in the Guaraná Champeix arena.  This ring was also used to familiarise the horses yesterday over a technical course.  There was a very large number of horses in this age group, 87 in all.  It was a very competitive class and as usual the final results were separated by just fractions of a second.  In the end “Crystal Clear North Star” ridden by Gaj Riossa from Slovenia was the winner.  Gaj told us:  “This mare is by “Christian 5”, dam sire “Cordalme”. She was born and bred in Slovenia with some friends of mine, the Pantelič family. When she was three years old they sent her to our stables, The Riossa Stables in Holand, and shortly afterwards we bought her. She has a lot of character and she’s a fighter in the ring.  I think she has a great future in front of her.  He went on to say:  “The course was technical but jumped comfortably.  I knew that the jump off would be very competitive and speed was going to be the key, but my mare is very fast. Overall everything went very well!”

In second place was “Aequitus VH Bergerhof Z” who is ridden by the Swiss rider Jane Richard Philips.  In third was another successful Spanish rider José Fumero who is sponsored by  Suzuki, riding the lovely grey, “Double R Coltaire who is also a CDE. Jose told us:  “He was bred in Asturias in the Doble R stud which belongs to Fran Rodríguez and Jorge Juárez. When he was a youngster they sold him to Portugal to Marina y Antonio Frutuoso de Melo and at the end of his 4th year the Stud bought him back again.  They sent him to me to prepare for the 5yr old classes here.  He was extremely green when I got him but jumped very well and I decided to buy half shares in him.  He jumps a lot of clear rounds and as he demonstrated today, he is very quick.” Describing the horse further José told us: “he is really elastic and loose but still looks a little at things.  These characters combined will make him a very special horse. He is very scopey and I think he isn’t yet 40% of the horse that he will become.”

In fourth place was the mare “Sidney” who is owned by Carlos Freudenthal and now ridden by Álvaro González de Zarate, and in fifth was“Kristal’s Beauty B” ridden by Armando Trapote.

At 18.00h we knew the winners of the 7yr old Finals.  Having been the favourite to win since very early on in the Tour,  the very talented Dutch rider Kim Emmen swept the board and took the top two places on the podium.  Today “Astrid’s Lad” took the winning slot from “Lady Angeles” who was in the lead up to that point.  Kim told us quite simply that:  ““Astrid’s Lad” is naturally faster than “Lady Angeles”.  ““Astrid’s Lad” was bred by Vikki Gosling and I hope he follows in the steps of his full sister “Blue Angel” ridden by Kent Farrington.”  The gelding is owned by the Bruntwood Stables.

Also owned by this stud and in second place was the mare “Lady Angeles”, an Oldenberg by “Los Angeles”, dam-sire “Lasino”.  The mare has had impecable results since her debut in international competition, and from 2019 she has jumped clear in 65 of her 76 outings. She was also the winner of the 5yr old Finals here at Montenmedio two years back and Kim hopes that she will be one of her future Grand Prix horses.

In third place was “Jotage B”, a KWPN mare ridden by the Scuderia 1918 sponsored rider, Giulia Martinengo. She told us: “we bought her just two and a half months ago.  We fell in love with her immediately when we saw some videos of her and we got a friend to try her for us. She is my favourite type of horse.  We own half of her with Scuderia 1918. Im very happy with her, she will jump on any surface and her attitude is always the same, she’s a real sportshorse, the type of horse that every rider likes to ride.  I think we can go a long way together.”

Tomorrow the CSI4* begins with both Medium and Big Tour classes.  There is also the Young Horse ‘Consolation Class’ for those not in the Finals  today.

All classes are streamed live on our web site and through the Sunshine Tour app.  You can also watch live on the Official channel  ClipMyHorse.TV.