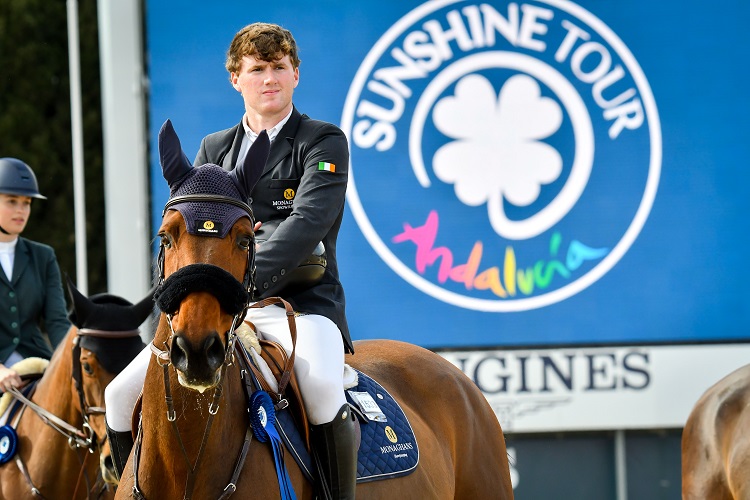 Sean Monaghan with ‘EMS Adelaide’ and Jason Foley with ‘CNOC Rua Chinook’, top two in the 1.45

Today’s 1.45 class was demanding to say the least, with only 4 riders making it through to the jump off with clears within the time.  In the end, Irish riders took the top two places here at Montenmedio, with Sean Monaghan winning the class, clear in 38.85s riding the Irish bay mare, ’EMS Adelaide’, who he also won the 140/145 2 phase with on the 26th of Feb.  Sean rode a forward but careful clear, making up time on the roll back turn after the double.  He beat his countryman,  Jason Foley who finished in 39,27s riding ‘CNOC Rua Chinook’ who, amazingly, he only started riding at the end of last year in 125 classes.

Sophie Evans (GBR) also jumped clear in the jump off completing a lovely careful round on ‘Florida Van Maarle’ and she took a well deserved third place.  Next two places were taken by Germany, with Lea-Sophia Gut in fourth with 9 faults on ‘Hanne Umonia’;  and  fifth was Daniel Lahmann who had just one time fault in the first round with ‘Kyamant Van’t Spieveld, as did Catherine Pasmore  (USA) with ‘Came’ who ended  up in 6th.

Another American rider shining today was the winner of the 140 class, Michael Hughes with ‘Levista DBH Z’ (Levisto Z x Ramiro Z), who has been jumping well here, but this is the mare’s first big win so far.  Second was Kendra Brinkop with ‘Eclatant’ for Germany who has had a great week here, a second place on the 3rd of March and was the winner of yesterday’s Coca-Cola Trophy class.  Both these riders are part of the Stephex Stables team and show the real quality of this stables.  In third was a Swiss rider who has already been very successful here, Aurelia Loser with ‘Nestor VDR’, and in equal fourth place, were Rebecca McGoldrick (CAN) who continues her winning streak this week with ‘Fanta M’ and Ava Vernon with ‘Billy Trysil’ owned by the Billy Stud.

There was a British top two on the podium in the 1.30 with Joseph Clayton (GBR) riding ‘Unex Arantos’  and Antonia Platt with ‘G Star Blue’.  Third was Anna Marie Vitek (CZE) with ‘Here I Am’.  Fourth and fifth were Spanish riders, Mario Rotllant Daurella on ‘Cerano’ and  Sonsoles Lasaosa Astier on ‘Tresor de Laume’.

The Young Horse classes also ran alongside these 2* events.  Today the winner of the 7yo was James Whitaker (GBR) with ‘Just Call me Henry’.  Tiago Morais (POR) won the 6yo with ‘Lightning’ and finally, the wonderful Belgian rider, Dominique Joassin took the top two places in the 5yo class with ‘Lovely LJ’ and  ‘LJ Corssini’ resp’.

This fourth week of CSI2* jumping concludes tomorrow with six classes including the 1.45 GP which is a FEI Longines Ranking class.