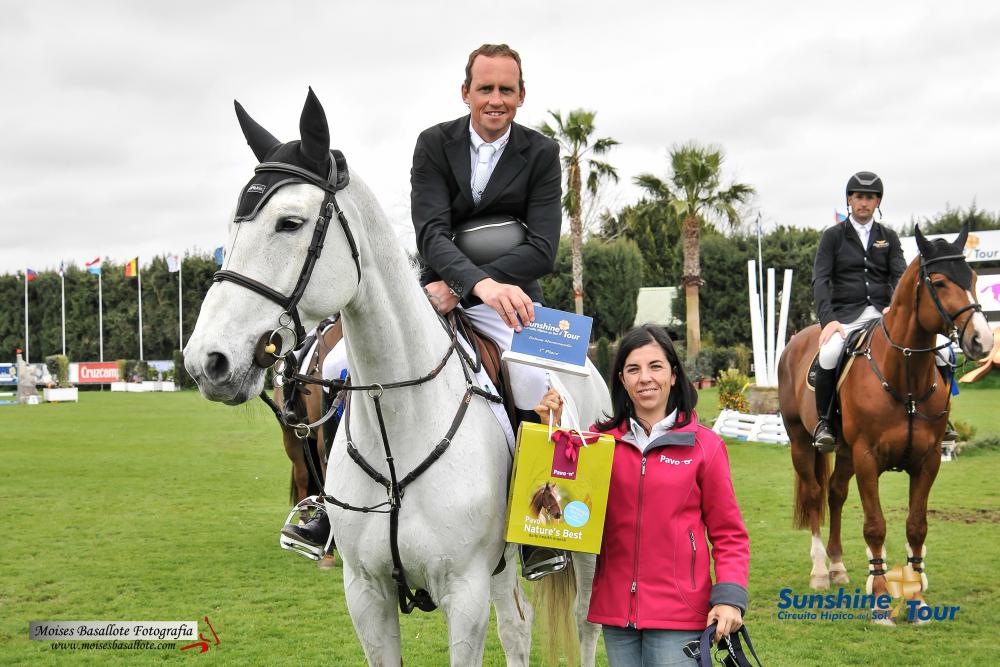 Tomorrow there are 13 classes, 4 being Invitational classes including the Big Tour GP, where 50 of the top riders from this year’s Sunshine Tour will compete.

The successful International, Irish rider, Trevor Breen with Bombay (Lord Z / Raffia by Bon Ami), beat off over 20 other combinations that got through to the jump off in the 1.50m, ‘Pavo’ Big Tour class at the Tour Today.

This was a Ranking class and was designed by the Italian course builder, Ulianno Vezzani. Trevor and Bombay, stopped the clock in 36.16sec just ahead of the German rider, Marcel Marschall on Fenia Van Klapscheut who could not quite catch him and finished in 36.35sec. In third place was the French combination of Olivier Robert on Vangog Du Mas Garnier in 36.43sec and in fourth was the Belgian rider, Karel Cox on Dublin Va Overis in 37.57sec. In fifth place was the British rider, Harriet Nuttall on Galway Bay JED in 39.19sec.

In the Big Tour C, 1.45m, Ranking class, Richard Howley (IRE) on Cruising Star (Cruising’s Micky Finn / Star de Noberlina) stopped the clock in 54.74sec. This was a very fast class. In second and third were the British riders, Guy Williams on Dalton D&Hoyo in 55.66sec and Joe Whitaker on Virgiinia in 56.38sec. In fourth was the Swedish rider, Antonia Andersson on Charity 41 and fifth was Italian rider, Luca Moneta on Neptune Brecrout.

The 1,40m, Big Tour B, had a British top two by the hands of Ben Walker riding Native Warrior and Chloe Winchester on Florida Van Maarle. In third was the Swedish rider, Stina Lillje on Rihanna K; fourth was the Irish rider, Michael G Duffy on Scenletha and in fifth was the Belgian rider, Virginie Thonon on Falbert SB.

In the Big Tour A2 there was also a British top two. Harriet Nuttell, this time riding  Silver Lift, followed by Chloe Winchester on Sportsfield Our Clare. In third was the Argentinian combination of Richard Kierkegaard and Bonjour Z. Another Brit took fourth, Jordan Gann on Lakeland Dancer and the Dutch pair, Anoek Van der Pluijm, and Gogo F took fifth.

In the Big Tour A1 we had another British winner, this time from Holly Smith and April IV.

In the biggest class of the Medium Tour A, at 1.40m the Swedish combination of Sara Molvidson-Hellström and J-Boston S.E. took the win. In second was the British combination of Abbe Burchmore-Eames on Booming Blue Z and the Spanish rider, Otti Verdú on Top Lulú was third. Fourth was the Brazilian combo of Giovanna Sobania on Coreana and fifth was another Spanish rider, Alfonso Arango on Tiberiade Fontaine.

The Medium Tour B was won by the British rider, Kayleigh Watts on Fashion V and again in the top placings, this time second, was Otti Verdú this time riding Twiggy Ka. Luis Astolfi and Narla took third place also for Spain and the Columbian pair, Nicolás Chaustre and Keve were fourth. In fifth was the French rider, Lara Postillon on Woman.

In the Medium Tour A the winning combination were American, Rosalie Biedron and Charmeur.

In second was the Spanish combo of Patricio Valdenebro del Rey on Ipanema DC and third was the Swiss rider, Charlotte Petit-Jean on Camouflage 24. Carron Nicol on Oldtown took fourth for Britain and the Canadian pair, Jenny Graham and Jack Diamond were fifth.

With the weather forecast for Sunday looking poor, we have decided to hold all of the Invitational classes tomorrow. This makes tomorrow a very busy and exciting day of competition and it will be the last day of this year’s Sunshine Tour.

The Small GP is a Longines Ranking class and will be at 9:30 in ring 5.

The Ladies Invitational will take place in ring 5 at 14:00.

The 1.40/1.45m, Medium Tour Invitational GP and the 1.55m, Big Tour Invitational GP are both Longines Ranking classes. They will be held in the David Broome arena, ring  3, at 11:30 and 15:30 resp’ .The latter is most anticipated class of the whole Tour, where the top 50 riders from the five weeks, compete over a 1.55m track.

All these classes will be hotly contested making an unmissable day of jumping here at Dehesa Montenmedio. We hope that you can join us.