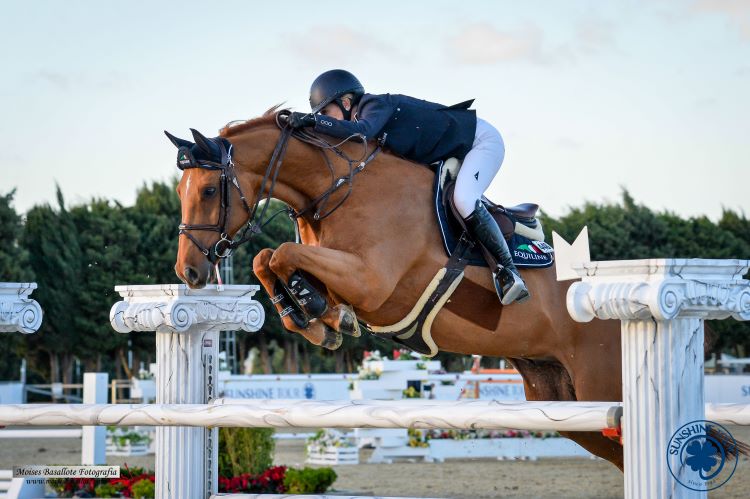 The first Big Tour Ranking class of this, the 5th week of the Autumn Tour, was hotly contested with 117 riders taking part.  The Tour started up again here at Dehesa Montenmedio in fine style after a short break and with even more participants and more than 600 horses ready to take to the arenas over the next few days.  This new Autumn Tour looks set to be an important date in the International calendar and has already proven to be extremely popular for both National and International riders alike.  With our installations amongst the best in the world and the superb climate here at this time of the season, clearly the riders and their teams are enjoying competing outdoors in the middle of November.

Today Laura Renwick took the top spot in the 1.45m, Big Tour, Longines Ranking class, with prize money totalling 25,400 euros.  Laura Renwick is one of the fastest riders in the world around a track and today proved no exception as she skilfully rode Dublin V (Vigaro x Calvados/Sable Rose), around today’s course, stopping the clock in a very fast 58.05sec.

Richard Howley took a win for Ireland in the 1.40m Big Class A.  He was riding Fame, by Harley out of an Investment mare and owned by Sarah Borthwick.  They finished the course in a mere 55.95 sec keeping Laura Renwick off of the top spot and in second place with Top Dollar VI.  Third was the Moroccan rider El Ghali Boukaa with Galoubet L.  There were 135 competitors in this class.

The 1.20m Small Class B, had a British top two with Rosie Gunn and Jagerbomb taking the honours and Ellie Guy with Ijver in second.  Third was the Swedish rider Linda Heed with Heart to Heart.

In the 1.10m the talented Czech sisters took the top two places with Anna Marie Vitek winning the class on Mateo di Belle, whilst Kristina Vite was second with Kamirez Van Orchid’s.  In third was Anastasia Nielsen from Monaco riding Donald de Bacon.

Competition continues tomorrow with nine classes including the 1.45m Big Class which is another Longines Ranking class and where we will see some of the horses and riders that are preparing for the Nations Cup, held here next week as the climax of our Autumn Tour.