JÉRÔME GUERY IS THE HIGH FLYER IN THE HORSEWARE GRAND PRIX 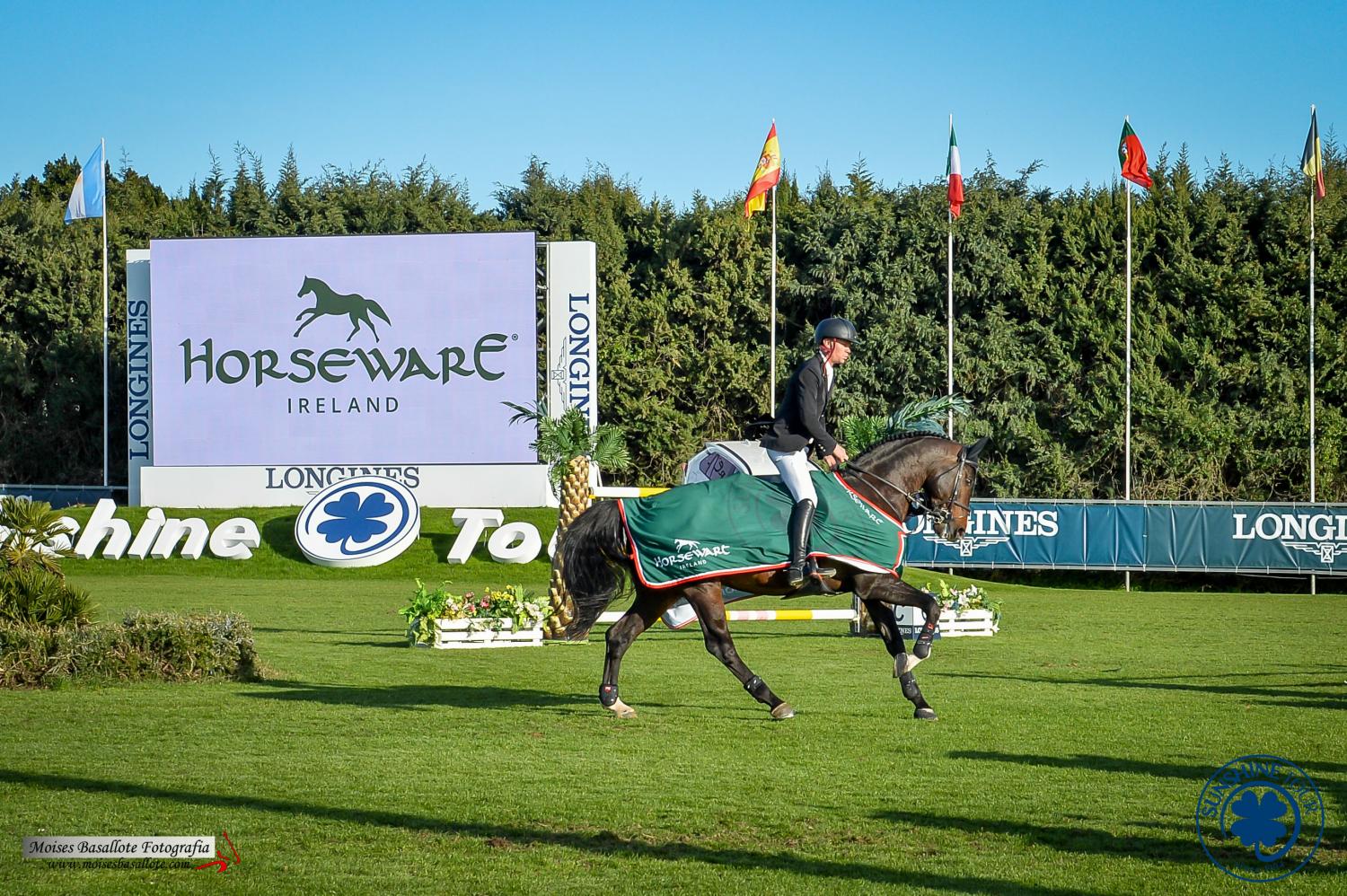 Today there were three CSI3* Grand Prix classes with prize money of over 93.000€.

Today the top international Belgium rider Jérôme Guery, was foot perfect winning two of the most prestigious classes of the day, both of which were FEI Longines Ranking classes.

The morning saw him win the 1.50m Medium Tour Grand Prix, riding the stallion, “Grupo Prom Milton” and by pure chance this class was held in the Milton arena which coincides with the name of the winner horse.  Jérôme has been riding “Grupo Prom Milton” for a year now; he is owned by Mexican rider José Alfredo Hernández who also owns the winning horse of today’s Big Tour A (1.35m) class “Grupo Prom Hacienda” who is ridden by the Spanish rider Jesús Torres.

In second place in this Grand Prix, was another Belgium rider well known here at the Tour, Dominique Hendrickx riding “ Floris TN”.  In third place was the German rider Richard Vogel, who has had a great week on top of the podium, this time riding “Alentejo”. There were 15 combinations in the jump off in this demanding Grand Prix which just happened to be the exact number in the Horseware Grand Prix ,the star class of this week.

In the Horseware GP jump off Gudrun Patteet and “Sea Coast Monalisa van’t Paradijs” were in the lead until Jérôme went in to the arena and in the end she narrowly missed out on her third big win of the week.  When the clock stopped Jérôme’s round was almost two seconds faster than Gudrun’s.  “I saw that Gudrun had gone fast and well, and I tried to do better!  I know my horse very well and these large arenas are great for him.  I think that I turned tighter than Gudrun back to the double and in the second line, I took out a stride.  In the last part of the course I was able to move forward in a strong gallop and I think I also took one stride less than her there as well.  Two years ago this pair also won the CSI3* Grand Prix here at Montenmedio. “I love to start my season here at the Sunshine Tour, it’s the best place in the world and with this win I am very, very happy, it’s a great start to the year.”  Jérôme plans to “go to the Olympic Games with this horse.  Last year we were prepared to go but unfortunately with the worldwide situation we all had to change our plans.  This year I hope that we may go to Tokyo.”

Jérôme’s comments on the course, designed Louis Koninckx a current European Team Champion rider,  were  “it was a good course.  We all know that at the Sunshine Tour the tracks are always big and difficult, but that suits my horse down to the ground. It’s his favourite type of track.  I was very confident it would suit us when I walked the course”.

In third place in this class Horseware Grand Prix was the Danish rider Andreas Schou riding the gelding “Quadrosson Ask”.

There was another Spanish win today, this time from Armando Trapote in the Small Tour Grand Prix class (1.40 -1.45m) also held in the main, David Broome grass arena. Riding the gelding “Tornado VS” he beat off the Irish rider, Conor Mcmahon with “Fame” by more than a second.  In third was the Swedish rider Sissela Smith with the mare, “Charmonix CC” and not content with just winning the class, Armando also took fourth place with “Lordana”.

There was an international flavour to the rest of the Tour today with victories from the Turkish regular here, Derin Demirsov with “Caprice D’Elle” in the Big Tour B (1.45m), the Brazilian rider Joao Victor Castro and“Helga” in the Medium Tour B (1.40m) and the French rider“Lara Postillon” with “Abalia”in the Small Tour B (1.35m).

And so we finish off the first week of the 27th Sunshine Tour here at the Installations of the Dehesa Montenmedio.  The week has been a shining example of how a strictly restricted sporting environment with top class riders and horses taking part does function.  On Tuesday the new week begins with the Young Horse Classes and continues with the first CSI4*.