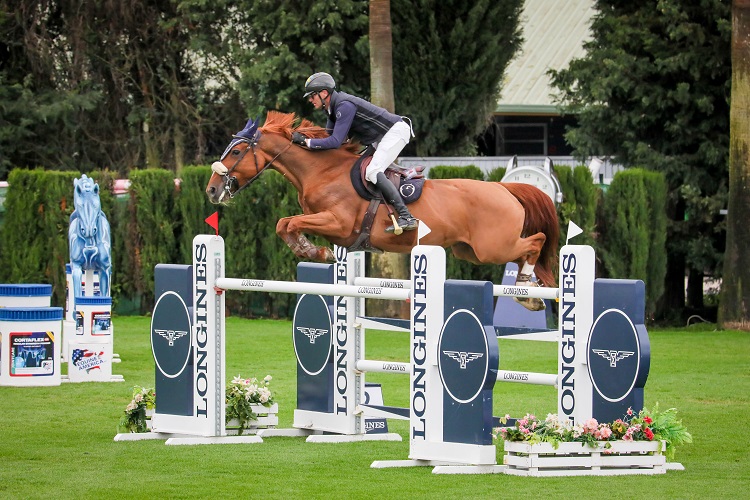 Swedish rider,  Marcus Westergren is no stranger here at the Andalucía Sunshine Tour and today he was our winner in the Big Tour 1.50 class with the lovely chestnut mare,  ‘Astree de Burgo’.  Indeed this is an exact repeat of his win here two years ago, in the same class on the 28/02/2020!  This athletic mare is by ‘Kannan’ with the dam sire,  ‘Socrate de Chivre’ and this partnership were also fourth in week 5 here on the 10th.  Today they won this 2Ph class in 25.18s around a track designed by Italian Uliano Vezzani,  which was held on grass in the David Broome arena.

The other Big Tour 1.35 class  was a speed class held in arena 18.  Another Portuguese rider was our winner,  Rodrigo Almeida and he was riding  ‘Chany G’.  His time was way ahead of anyone else in the class, just 59.14s segundos.  In fact he had over 5 seconds in hand from the Spanish rider Julio Arias who was riding  ‘Tamino AZ’.  In third was Dutch rider,  Kim Emmen with ‘Catoo-Lavall’.

The Medium Tour 1.45 had a British top two with two top British riders!  Holly Smith won the class with the amazingly consistent  ‘Azolette’, starting off their week as she did last week when they had two wins.  Robert Whitaker was second with  ‘I’m Special Too DHH’.  For third place we move across to Ireland with Dermott Lennon, and  ‘L’Esprit Hero Z’.

Yet another Portuguese rider was on the podium in the Medium Tour 1.40;  winning the class was Rodrigo Almeida who was riding ‘Elvic V/H Hoeve-Terras Z’.  The next two places went to Irish riders;  in second was Anthony Condon with ‘Ajaccienne’ and in third was Jessica Burke with ‘Inpulss’.

Antonia Platt (GBR) with ‘G Star Blue’ was the winner of the Medium Tour 1.30, second was Doron Kuipers (NED) with ‘Isidoor’ and in third was Spanish rider,  Sofía Moreno with ‘Klanhugh Dreamland’.

In the Small Tour classes the winners were as follows: In the 1.40,  first was Iwan Carpenter (GBR) with ‘Merllyn’s Chacco B’ second and third were the Spanish riders, Borja Bidón Daurella with ‘Alves H Z’ and Iker Jauregui with ‘Veni Vici’.  In the 1.35 the winner was also from Great Britain, Mark Wildish with ‘Jupiler’;  second was Sean Monaghan from Ireland with ‘A.N. Cassius’ and in third was  Ainhoa Manero (ESP) with ‘Bellefleur PS Z’.  In the 1.30 the British took over completely with the top five places taken by them!  Our winner was Hollie Pearce with  ‘Delina II’.  In second, third and in fifth was the amazing  Abbe Burchmore-Eames  with ‘Booming Blue Z’,  ’One Clarimo’ and ‘’Kept Secret T’! resp’.  A great day at the office!!  Sliding in between Abbe’s horses and in fourth place,  was Lucy Blair with ‘Chapon VD Heffinck Z’.

These are today’s main results and the rest can be found on our web site and on the Sunshine Tour App.  It was a completed day at the show with bad weather conditions and changes were made in the schedule so that the best footing was available for the horses.  Despite all this, jumping went well however the Farewell Young Horse classes were postponed until tomorrow Friday, when the forecast is clear.  Due to this in a knock on effect,  the Ranking classes that were programmed for tomorrow have moved to Saturday.

This will be the last weekend here at the Andalucía Sunshine Tour, which is sponsored by the Consejería de Turismo, Regeneración, Justicia y Administración Local de la Junta de Andalucía, a través de Turismo y Deporte de Andalucía.  Jumping finishes on Sunday 27th with the highlight classes of the Tour,  and prize money of 148.700 euros to play for.  Access to the showground and all parking is free and, as the weekend promises better weather, we hope that you can come and enjoy this live event in person, watch world class riders and horses competing and enjoy some local fare in one of the five  restaurants and visit our shopping village.