Mariano Martínez and Quicksilver are today’s winners of the 1.40m Big Tour Class 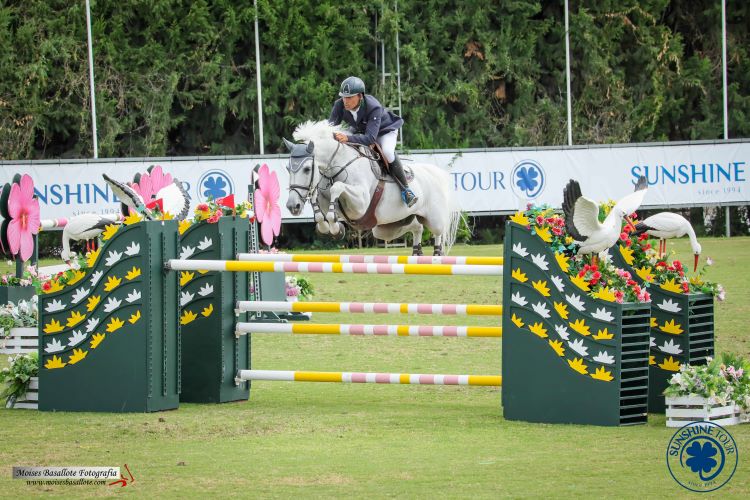 Mariano Martínez and Quicksilver are today’s winners of the 1.40m Big Tour Class

Tomorrow the Autumn Tour continues with a busy day of jumping and the 2021 Tokyo Olympic Qualifier Grand Prix.

Spanish rider Mariano Martínez Bastida was once again top of the podium in the 1.40m, Big Tour class which had over 50 entries.  The class was held on grass in the David Broome arena and 15 combinations went through to the jump off.  Riding the very talented and fast grey, Quicksilver by Quick Star, he repeated his win from last Sunday beating the talented American rider Laura Kraut, who has had a host of placings over the last two weeks.  This time she was riding the gelding Constable II by Harley; ds Lupicor, with whom she was also second in the 1.45m Big class yesterday.

There was a tie for third place when first to go and the leader for much of the jump-off, Spanish rider Eduardo Álvarez Aznar riding Fidux by Malito de Reve; ds Voltaire,  ended up on exactly the same time as the British rider Matthew Sampson riding Cristo Beech by Its the Business; ds Cantero.

The 1.35 m Medium Tour class B was a two phase class, and was won by the Portuguese rider Luis Sabino Gonçalves with Adiamood De L’Abbaye.  Kayleigh Watts (GB) was extremely close on his heels taking second place by just 0.04 of a second with Harley.  This pair have had a successful Tour here over the last two weeks with two wins in the first week.  The German rider Nicola Pohl, was tight on the heels of the leaders of the class, this time she was riding Accolade and took   third place, just 0.03 of a second behind Kayleigh.

The Spanish dominated the 1.30m Medium Class A. The winner was Ainhoa Manero with Fortín, a repeat victory for them.  Second and third places were taken by Alejandro Álvarez with Little Chap S and Diacada resp’.

Alejandro Álvarez was also winner of the Small Class B with Califa SQ.  In second was the Irish rider Joanne Sloan-Allen and Wicked Hope.  Juan Miguel Febrer was third with Grantender.

In the Small Class A, the American rider Ariana Rockefeller was first and third with Caelle and Chaccadella resp’ and the Swedish rider Cornelia Bordier was second and fourth with Ibesi Cooper and I resp’.

Competition continues tomorrow with a packed day of classes including the highlight of the week, the Big Tour Grand Prix, a Longines Ranking class and 2021 Tokyo Olympic Qualifier. A range of classes from 1.10m up to 1.45m finishes off the busy second week of the Autumn Tour here at Montenmedio.