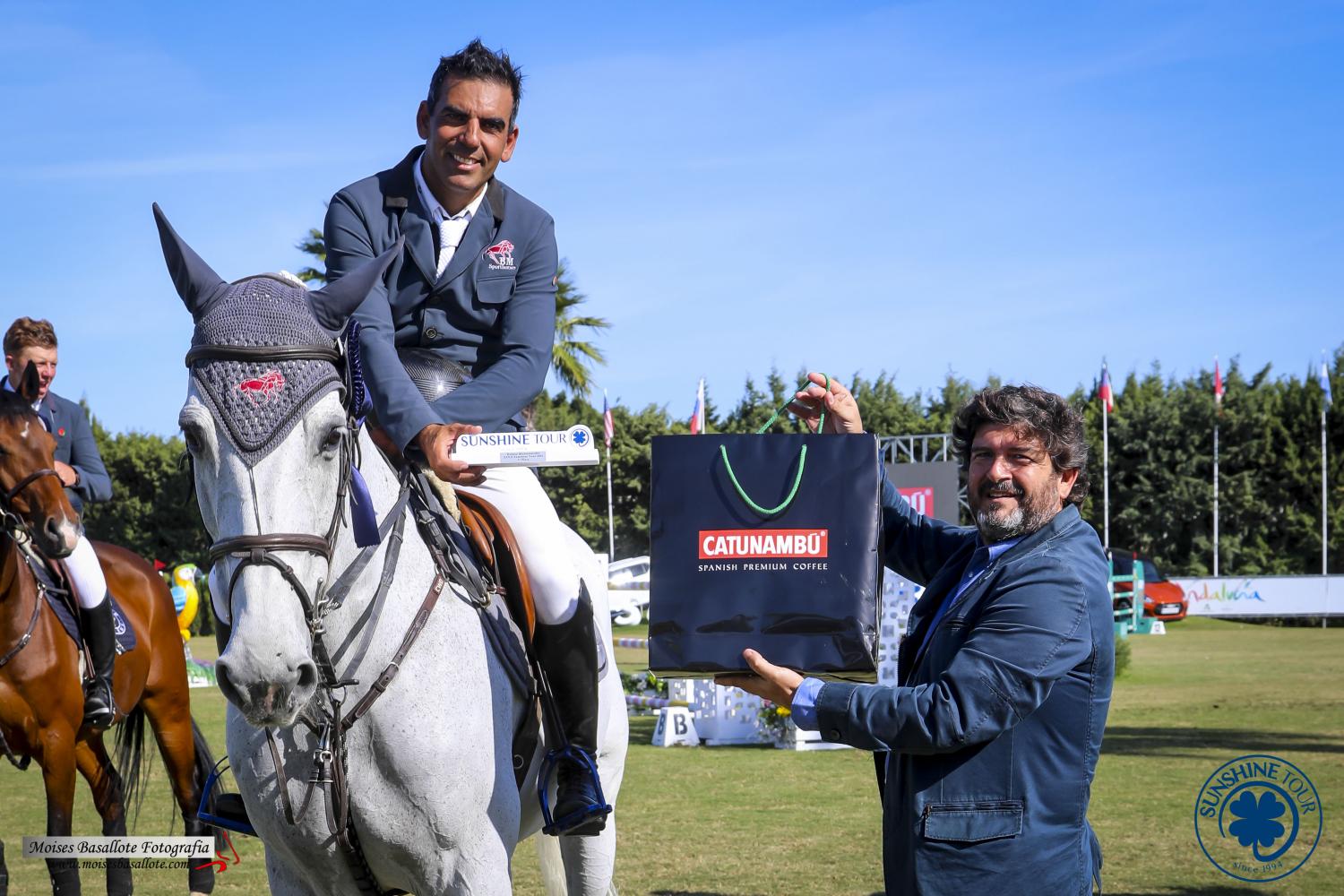 Mariano Martínez Bastida is at the top of his game, last Sunday he took Bronze in the Spanish Absolute Championships.  Yesterday with the amazing Quicksilver, who is by Quick Star, he won the 1.45m Big Class and today with the same horse, he once again stepped up to the mark, winning the first Catunambú sponsored, Longines World Ranking class of the October Tour.  Mariano hails from Murcia and is based in Madrid, he rode a ferociously fast round in this testing class, that was held on grass in the world renown David Broome arena. Quicksilver is no stranger to this arena and the grey flew, foot perfect, around the track in a mere 61.83s.

The nearest competitor chasing this time was another very well known rider here at the Tour who has had a number of big wins over the years, Matthew Sampson (GBR). Even with Matt’s best effort he ended up on 63.39s a tad behind the Spanish speed king.  Matt was riding the 11yr old Connecticut who is by Conthargos. This pair have only been competing together a few months but despite this, they have already clocked up a few very good results including podium places in both 2* and 3* international events.  We really look forward to seeing their progression over these weeks and to see if they manage to challenge Mariano and Quicksilver and knock them off of the top spot!  The Brazilian rider Felipe Amaralis another one to watch as he came in third today, taking the same podium place as yesterday but with a different horse.  Yesterday it was the lovely Germani T, but today he took third with the experienced 10yr old, Androide 3K, who was bred in Brazil-

The Milton arena was the site for the 1.35m class which was a 2 phase special with 70 entries.  Once again we see consistency in the riders and horses winning classes and this time there was an all female podium.  Spanish rider Ainhoa Manero was the winner ,  riding Turquoise D’Ivraie who is also by Quick Star making our two big class winners both from this stallion.  Yesterday Ainhoa won her 1.35m class riding Fortin in an amazingly fast time and today she repeated her win well ahead of the rider placed in second and clearly showing her talent for riding against the clock.  Two different Swedish riders took second and third places today with both of them riding very fast neat rounds. In second was Frida Berggren with the 8yr old Chanteric Peu DM Z who is by Cannabis Z and owned by HP Stables B.V.), whilst in third was another regular rider here, Antonia Andersson riding Javenia.

Also held in the Milton arena was the Medium Tour 1.30m class with a win from the Israeli rider, Regis Villain who was riding Dreamer de la Pointe. Regis was third in this class yesterday, he has really started off this CSI2* in great style. Today Lila Bremner (GBR) once again took second place in this class with the French Sporthorse Cocktail D’Azur and in third was the Italian rider Sofia Manzetti who was riding the lovely gelding Cansino who is by Cassinu.

Luca told us about Epic “I found this horse through Brigitte Stern, who bred him.  Brigitte’s rider is a pupil of mine, Patricia Segura, and she was riding the horse in the 5 and 6yr old classes here at the Tour.  After seeing the horse had considerable talent they wanted to give me the opportunity to take it on and take it up a level.  The truth is that I love the horse.  It's a horse with a very good attitude and it’s very brave.  The horse has also had a very lucky start as it has competed here at the Sunshine Tour since it was a 5yr old and this has permitted it to learn in the very best way, developing both his skills and his enormous courage”.

Today the 5yr olds had the opportunity to jump in the very large main grass arena.  The results were good with 28 going clear from 33 entries.  This was a 2 phase special class and the fastest couple was the British rider Leo Lamb with the gelding Acapella, who is by Action Breaker, ds Kannan.

Classes start up at 09:30 tomorrow and you can follow the live action on our web page, through our app or on ClipMyHorse.tv.