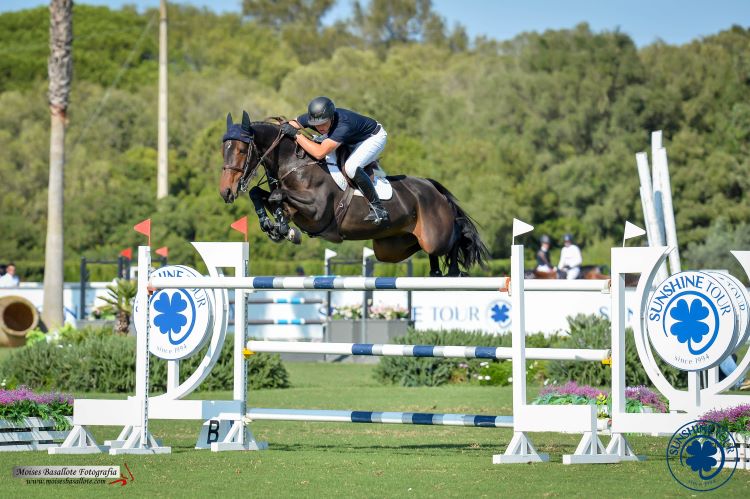 Three British riders finished in the top four of the Big Class Today.  Matt Sampson really is on top form here at the Autumn Tour and has a great string of horses at the moment.  Today he was riding Rachael Evison’s, Curraghgraigue Obos Flight (Obos Quality 004, Errigal Flight) in the 1.45m Longines Ranking class which they won in just 62.64sec with a neat fast clear.  Matt also took second place in the hotly contested 7yr old class.

Kayleigh Watts kept up her brilliant record of placings in this Autumn Tour, by taking third place in 63.62 sec in this class with the super mare Ninkie de VY Z (Nonstop x Fidji du Fleury).  John Whitaker showed he is also on form by coming in fourth riding Unick du Francport and newly arrived Brazilian rider, Pedro Veniss with Balada de Colores was fifth.  The class was held on grass in the David Broome arena.

The 1.35m class was also held in this arena and once again there was a British win.  Kayleigh Watts took the honours this time in 56.5sec on the mare by Chatman, Kimosa Van Het Kritrahof (Chatman, Eros Platiere). This mare has had great results with Kayleigh in both of the previous weeks here at the Tour.  The Spanish rider Mariano Martínez was second with the mare Hybalia, who is by Tygo, in 56.83sec.  Once again John Whitaker was in the rosettes, this time taking third place with the wonderful gelding, Sharid (Toulon,  Vancouleurs).  Recently arrived Duarte Seabra from Portugal, was fourth with El Tintoreta.T

The young Irish rider Tom Wachman, who is just 15, showed off his talent today winning the 1.30m Medium Class riding Cesha Old.  The class was held on the surfaced Milton arena.  Duarte Seabra was also successful in this class this time taking second place with Fernhill Clooney.  Kayleigh Watts was also on the podium once again, in third with Harley.

The Young Horse classes were busy today and the 7yr old class did not disappoint. The Egyptian rider Sameh El Dahan, was uncatchable with Sycamore Horse Farm’s gelding, WKD Little Star, by Quick Star.  Matt Sampson was second with the very consistent Jafabalou (Balou du Rouet) and the Swedish rider Antonia Andersson with the mare, Dyneine de Lilau was third.

The 6yr old class was dominated by Olivia Skinner who took first place with Jobijn  (Everdale) and second with Costa del Sol B Z (Carerra VDL).  This is the fourth victory for this rider in this section of the Young Horses.  José Fumero with the lovely Esto de Viscourt took third place today.

The Americans took the top two spots in the 5yr old class which was won by Julie Welles and Kill Bill (Grodino,  Mr Blue) owned by Waldman Horses. This is their third victory so far at the Autumn Tour.  Second was Molly Hay with the mare,  Kiek Now S and in third was the Spanish rider, Joel Valles with Claire de Toxandria Z.

Tomorrow there are nine classes including another Longines Ranking class, the three Young Horse sections and a Pony class.