Michael G Duffy is unbeatable in the Andalucia Grand Prix 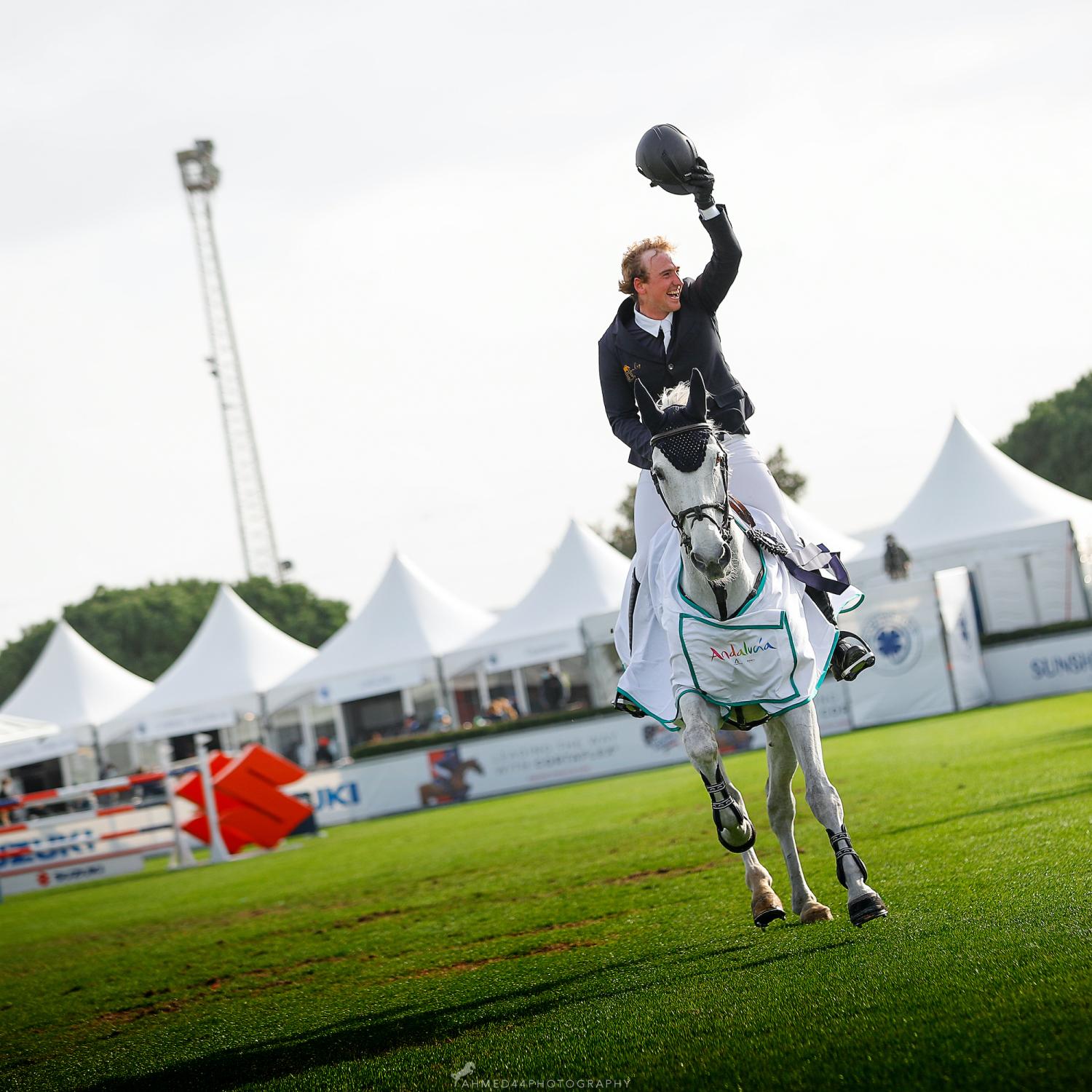 The Andalucía Grand Prix will be aired on local TV over the following days and also on numerous international channels.

What an exciting CSI4* Grand Prix class today on Andalucia Day here at Montenmedio.  This prestigious class was sponsored by the Junta de Andalucía and the very testing course in the first round, left only a handful of top riders going through to the jump off.  With internationally renown riders such as Jérôme Guery and the world number, one Steve Guerdat both going through, it was clearly a jump off not to be missed.  Just after  our winner, Michael G Duffy, got off his horse the very talented Irish rider told us:  “Today the course was very difficult, even with top level riders competing only 6 combinations got through the first round with no faults.”

Of these six riders in the jump off, the first to go was British rider Joseph Stockdale with the lovely “Equine America Cacharel” and they jumped a perfect careful clear round.  This set the bar, a clear was now needed in a faster time, some thought that looked easy but as it turned out it wasn’t really the case. When Michael G Duffy went in he rode a fast and accurate round, and luck was with him.  He told us  “I didn’t do anything stupid in there.  I rode the whole course fast and in the last line I pushed that bit harder and that’s where I think I made up the time.”  Michael told us he what he thought of the course:  “There were faults from the horses all the way around the course, which is the mark of a good job being done by the course designer.” Our course designer today was the Spanish Elena Boix Gracia who is from Catalonia.

Michael G Duffy’s gelding “Lapuccino 2”, is a 13yr old Irish sports horse owned by Carl Hanley Sporthorses Gmbh.  He has already started off this season with very good results and today he clearly demonstrated his   scope.  ““Lapuccino” has been with me for 5 or 6 years now and each year he improves and he has taken us competing all over the world.  I adore him.  Today he jumped his heart out for me to win this GP and he is a very special for me.”

This meant that in the end Joe’s lovely round earned him a well deserved second place, as Steve Guerdat with “Albfuehren’s Maddox” and Jérôme Guery with his star horse, “Quel Homme de Hus” both had four faults despite having extremely fast times, as they rode sharp neat turns and pushed on to the fences.

Jose Larocca was fifth with “Finn Lente” in a more sedate time but also with 4 faults and Manuel Fernández Saro, was the only Spaniard who classified for this Andalucia Grand Prix.  Today he was riding “Jarlin de Torres” and also rode a steady round to take sixth.

Other notable successes today came from familiar faces, Richard Vogel and David Will. Once again David was the winner of the Medium Tour Grand Prix and today he was riding “Quentucky Jolly”.  Their winning time in the jump off was 1.75s faster than  Jodie Hall McAteer who took second place. With this result David Will now has 6 wins here at the Sunshine Tour so far and many other top podium places.  Richard Vogel took third place in the Big Tour 1.45m class which was held in the Hickstead arena.

Richard isn’t far behind David in his tally of wins here at the Tour so far, he has 4 and has also been in the top 5 on 9 occasions.  These two riders are partners who run their stables inDagoberthausen (Germany).

In the Medium Tour GP there were just 11 riders in the jump off from 71 entries.  Jodie rode two super rounds with “Kimosa van het Kritrahof” taking second place in front of Wilm Vermeir who ended up in third place with “Joyride S”.

The Small Tour C, Grand Prix was won by the young rider Eden Leprevost, who is the daughter of the Olympic French rider Penelope Leprevost.  This was a class with 48 entries and only 4 jumped clear in the first round.  Eden and “Une Etoile Landaise” now finish the first part of the Tour with two wins and being placed in the top five in 8 classes.  In second place in this class was Faye Sutton from Great Britain riding “Zoey 12”.  In third was Jacob Hellström from Sweden riding“Chuck Bass.”

This finishes off the first part of the XXVII Sunshine Tour which has been full of top class sport from world class riders and horses, not only from the world of showjumping but also from eventing.  The atmosphere here has been good and very professional from all those taking part in the competition, with everyone acting responsibly and following the health guidelines.  The installations have functioned  perfectly and everyone here is happy to be competing and training at the best Equestrian facilities in Europe.

The Andalucia Grand Prix will be shown over the following days on the Spanish sports channel, Teledeporte and also on other international channels.  It can also be watched online on the official channel of the Sunshine Tour, ClipMyHorse.TV.

Jumping starts up again on Thursday the 4th of March with the CSI2* and the Young Horse classes.