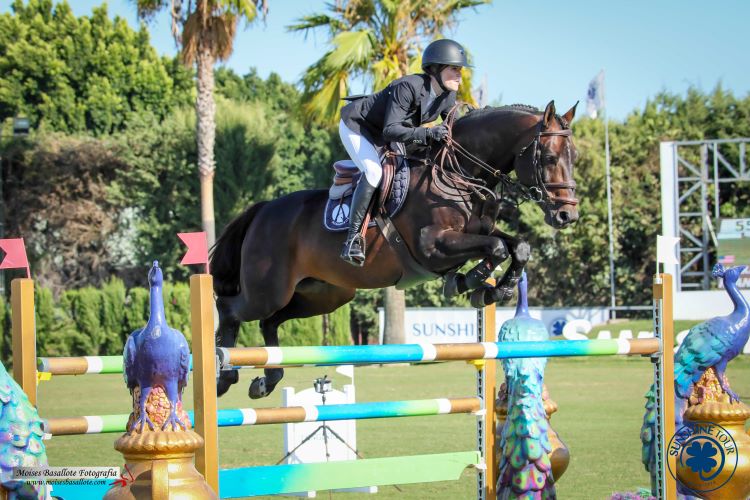 Mariano Martínez was second to the American rider with Quicksilver. Kayleigh Watts with Kilbarron Rue was third in this 1.40m Big Class.

The American rider Taylor Alexander, with the stallion Ryanair de Riverland by Quick Star out of a Papillon Rouge mare, rode an amazingly fast round in the jump off of the 1.40m Big Class today.  Her round was neat and brave with superb riding from a sharp roll back turn from the double of uprights, to the gallop to the last two fences, highlighting her ring-craft and seeing her take the top of the podium in just  36.6sec.  This is her second win in this class here at the Autumn Tour.

Before Taylor took the lead Mariano Martinez from Spain, with yet another offspring from Quick Star, went into the lead knocking the British Rider Kayleigh Watts off of the top spot.  Riding Quicksilver, Mariano’s round really did look unbeatable and his time was 36.61sec so very close behind Taylor's.  This pair have proved their consistency at this level during the Tour, winning this class twice before.

In the end Kayleigh Watts who is a regular on the podium here at Montenmedio, had to be content with third place with Kilbarron Rue by Gelvin Clover, dam sire Barron de Chantepie).

In the 1.35m class there was another American victory, this time for Laura Kraut. She won this two phase class in 26.24sec riding Galliano VM (Ukato, Vincenzo) beating off the young Irish rider Tom Wachman riding Dinaro (Cardino, Credilo).   Third place was once again taken by Mariano Martínez this time riding the very successful Hybalia who is by Tygo.

The 1.30m was won by the British rider James Wilson with Cooley Elusive, second was the Spanish rider Ainhoa Manero with Fortín and finally in third, was the German rider, Elena Appendino riding Diabolik.

Elena was also successful in the 1.20m class winning with Iceman.  Second was the Irish rider Joanne Sloan-Allen with Wicked Hope and third was the Spanish rider Juan Miguel Febrer with Grantender.

Natalia Appendino was the winer of the 1.10m class riding Millfield Cliche.  Second was Victoria Loane from Ireland riding Juicy and in third was a Spanish rider Mar Valdés riding Cupido.

Tomorrow we look forward to the Big GP class which is the highlight of the week’s jumping here at the Autumn Tour.  All the top riders and horses will be competing in this 1.50m Longines Ranking class that counts as qualifier for the 2021 Olympics in Tokyo.  There are also six other classes all of which may be watched on our live streams.