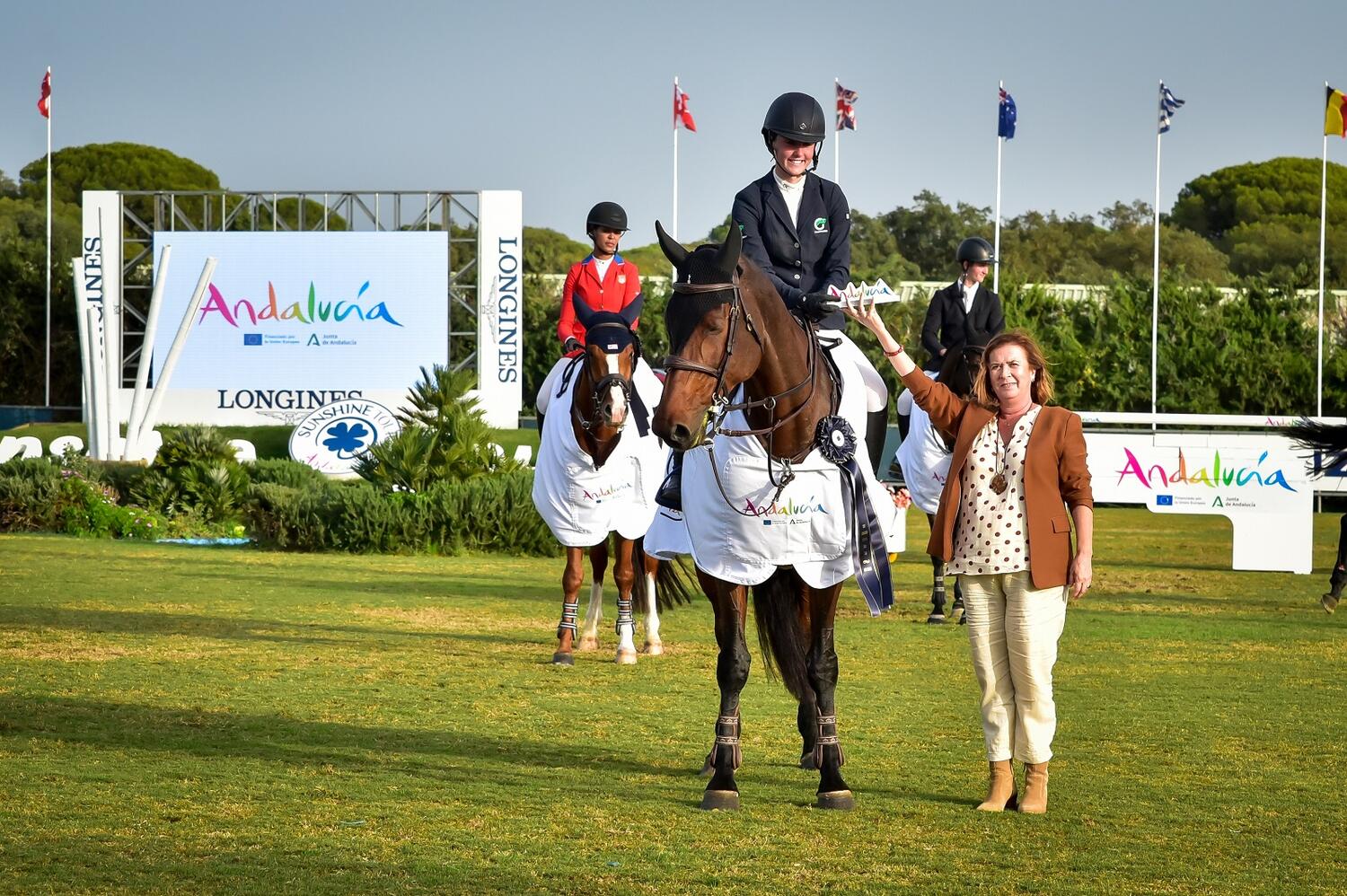 What a day of jumping! With perfect conditions the Andalucía GP, the highlight of the II Andalucía October Tour was a very demanding track by Javier Trenor, with some seriously challenging related distances and questions, including a triple bar spread to a double of two uprights which caused quite a few faults! 12 riders got through to the jump off, with Robert Murphy jumping a super neat and very fast clear round and going in to an early lead with ‘How Easy’ on 35.17s.  However, when Niamh Mcevoy entered the arena it was clear she wasn’t going to canter round, and she absolutely flew, foot perfect on this 12yr old mare, stopping the clock in an utterly amazing 32.06s and despite some brave challenges, no-one could touch her. ‘Templepatrick Welcome Limmerick’, is by ‘Limmerick’ and is owned by Robin Bingham. This isn’t their first podium here as they were third in the Hipotels Trophy class on the 14th of October, and 4th in the Suzuki GP on the 16th. In her interview Niamh told us that this was her first time here in Montenmedio, “I was so delighted with my mare, she jumped amazing. The first round I thought was really strong, there were a few very difficult lines especially at the start of the course but she tried her heart out as always so I was so happy with her.  She just jumped so amazing in the jump off, the first line we got off on a stride less, and I did eight to the second line as well, but she’s such an amazing mare and she tries so hard so careful and so brave’.  It’s only her second 3* Grand Prix so I’m totally over the moon’. Well done Niamh, what a brilliant Tour you have had here!

Irish legend Cian O’Connor was riding the lovely ‘Kilkenny’ and was last to go in the jump off, his round was very professional and he stopped the clock in, 33.51s taking a well deserved second place.

Mavis Spencer from the USA had a brilliant end to her time here and has improved her results every day. Today she took third in this class with a lovely balanced round with ‘Carissimo 25’ who is owned by Georgy Maskrey-Segesman’ who works with Mavis and is her best supporter.

Not only Was Mavis third in this class but she also won the 2* GP with Carayuno’ (‘Carambole’) who is owned by Hendrick Rijkens, alongside Billy Twomey with ‘Lady Lou’ (‘Lord Z’ x ‘Caesario’) both stopping the clock in 39.69s. We interviewed Georgy after the 2* GP win earlier in the day:  ‘When we came over for the Tour, Hendrick had a horse that he thought we could also show and we started jumping it in the 130’s with Mavis until they got comfortable together and today he was unbelievable’ .

Billy Twomey also told us after his shared win:  ‘I’m delighted with my win and really happy with my horse as she has been off work for some months and it has been nice to bring her back to the Tour to get her back up to some fitness’. He told us he was happy with the ‘fantastic facilities, brilliant for the horses to have three weeks here to build them up’. Billy also thanked his long term supporter and owner Sue Davis who couldn’t  be here this weekend but without whom, he believes his career wouldn’t have been as successful without her support so he is ‘very, very grateful to her for everything’.

Finishing off the results, in the Andalucía GP in fourth and fifth were two top British riders, Robert Murphy with ‘How Easy’ and Tim Gredley with ‘Imperial HBF’.  The prizes were given out by Secretaria General de Turismo de la Junta de Andalucía, Yolanda de Aguila.

And these are the main results on the last day of the  II Andalucía October Tour.  The whole event has been sponsored by the Consejería de Turismo, Cultura y Deportes de la Junta de Andalucía, and co-financed by the European Union.

After four weeks of jumping, we would like to congratulate Armando Trapote Mariscal who won the 2022 Absolute Champion with ‘Tornado’ in the first week here. We would also like to congratulate the Spanish team for their wonderful win in the Nations Cup this past week, and especially the chef d’equipe Carolo López Quesada and the riders,  Jesús Garmendia Echevarría, Ismael García Roque, Santiago Núñez Riva and Teresa Blázquez Abascal.

Overall we have had over 600 jinetes and 1.500 caballos from 36 countries. We have seen some of the greatest international riders here including Laura Kraut, Pedro Veniss, Holly Smith and Cian O’Connor and discovered some wonderful young riders here at the tour including Mavis Spencer, Skye Higgins and Robert Murphy and of course today’s winner Niamh Mcevoy to name just a few!

The II Andalucía October Tour not only brings international sport to the area but is an important social and tourist event here in La Janda, Cadiz. It allows local businesses to extend their seasons and also creates 850 jobs both directly and indirectly. With overnight stays estimated at 10.000 and an average spend of 256 euros/day/person the economic impact in this area, is calculated to be over 25 million euros.

From all of us at Montenmedio we thank you for your support and hope to see you all again next year in the 2023 Sunshine Tour.