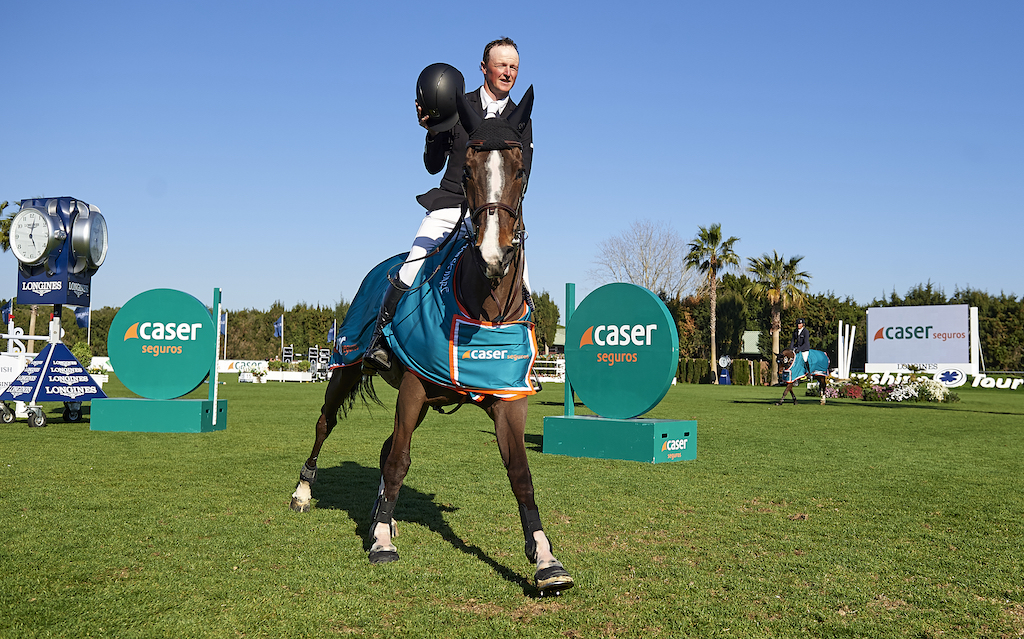 It was a splendid summer day today in Vejer finishing off this first CSI4* week at the Tour, with the Grand Prix class sponsored by Caser Seguros.  Over the last four days more than 650 horses have taken to the arenas during an intense schedule of top lev

It was a splendid summer day today in Vejer finishing off this first CSI4* week at the Tour, with the Grand Prix class sponsored by Caser Seguros.  Over the last four days more than 650 horses have taken to the arenas during an intense schedule of top level competition.  Today the climax of the week was the GP class with a spectacular win from Peter Moloney riding the mare “Ornellaia” from Team Harmony.

There were just five riders through to the jump of this impressive class with the Belgian rider Gudrun Pattet just missing out on one time fault.  First to go was the Swiss rider Carlo Pfyffer and the crowd held their collective breath as he flew round with a neat clear.  He was just pipped at the post by “Ornellaia” who took the lead, with just under second in hand.  The Swedish international rider Frederik Jönsson rode to win but couldn’t quite catch the other two and his time placed him into third. Julio Arias and Billy Twomey both had a pole down and took fourth and fifth (resp).

Javier Trenor was the course designer today, he told us:  “for the first CSI4* here at the Tour and being the beginning of the season, the track was sufficiently big and technical.  It rode a little harder than I thought it might but this is maybe because the horses are not quite yet on form”.  He also told us; “It’s true that the time allowed should have been a little tighter but this did help make the track a little more comfortable to jump”.

In the 1.45m Big Tour, the Irish were also on top form, Richard Howley, last week’s winner of the GP, easily took this class with “Cruising Star” being nearly 3s faster than the British rider, Max Routledge who was second.

The 1.45m Amateur GP class, sponsored by the Ayuntamiento de Vejer, was also held in the David Broome arena.  This class proved very testing for the competitors. From 50 combinations entered, only 8 went through to the jump off with the time allowed being the critical factor.  In the end the American rider, Taylor Alexander, took a well deserved first place riding her stallion, by “Quick Star”,  “Ryanair de Riverland”.  The Irish rider, Greg Broderick was also very fast but had to make do with second place whilst Stephan Naber was third.

It was a testing day of exciting classes here at the Tour but also a very emotional day. The Blázquez and Arango families; and all of the people involved with the Sunshine Tour,  dedicated today to the memory of the much loved and very sadly missed Alfonso Arango, who was a wonderful rider, loved by everyone and is much missed as a regular part of the Sunshine Tour family.

Alfonso,  we will never forget you.