There’s no stopping Pedro Veniss! Another win with ‘Nimrod de Muze Z’, in the 1.50 Longines Ranking 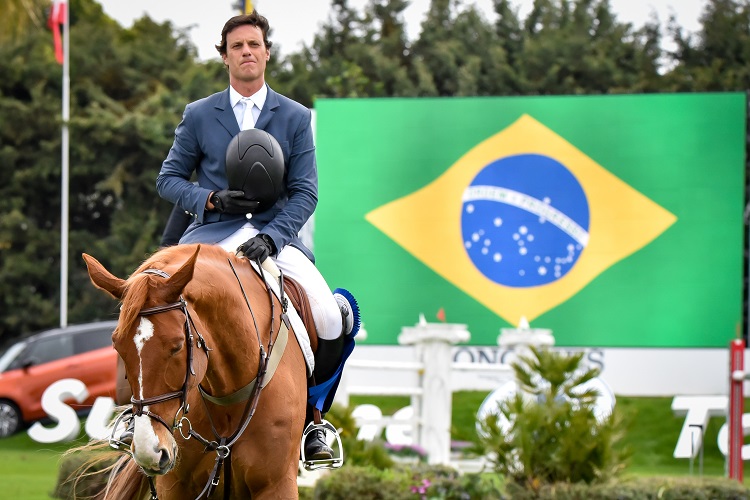 The Brazilian triple Olympian rider, Pedro Veniss, and the very athletic, ’Nimrod de Muze Z’ were the winners of our American Equine Grand Prix here on the 27th of February, and today they absolutely flew around the ‘Ayuntamiento de Vejer’ sponsored, speed class in a time of 66.98s.  This chestnut  gelding, is by ‘Nabab de Reve’, dam sire ‘Tinka’s Boy’, and owned by Earl Fillatre Equitation.  He certainly showed his class, beating off another double Olympian from Brazil, Bernado Cardoso de Resende Alves with ‘Mosito Van Het Hellehof’ who finished in 68.14s in second place.  This stallion is by ‘Elvis Ter Putte’ and interestingly, his dam sire is also ‘Nabab de Reve’.  What a top two!!

In third place was the British rider, Sameh el Dahan who was riding Joanne Sloan Allen’s mare, ’Wicked Enigma’, by ‘Cellestial’,  Sameh has participated in two WEGs and one WC.  In fourth was another rider who is rarely off of the podium here, Kendra Brinkop from Germany with ‘Malissa de Muze’.  In fifth was Douglas Lindelöw from Sweden, with ‘Casemiro CC’.

The Big Tour 1.45 class was also a 2phase Sp class, and today the winner was the international Irish rider, Richard Howley with ‘Beryle de Vains’ who is by ‘Diamant de Semilly’, ds, ‘Robin II Z’.  This mare started off jumping here at the tour with the Spanish rider Arantza Berasategui Garro but seems to have formed a great partnership already with Richard, in a very short time.  They stopped the clock in 33.85s a smidgeon ahead of Holly Smith in 33.87s, for her second, second place today!  This time with ‘Azolette’ who is a lovely mare by ‘Commisaris’, ds, ‘Concorde’.  In third was one of yesterday’s winners, Laura Klaphake for Germany with ‘Concollon PS’.  Fourth was Argentinian rider, Richard Kierkegaard with ‘Contiki’ and in fifth was Spanish rider, Antonio Mariñas Soto with ‘ Expresso Minotiere’.

The other Longines Ranking class today was the Medium Tour 1.45 which was held on grass in the Hickstead arena.  There was a New Zealand win in this class from Bruce Goodin, four time Olympian,  riding ‘Backatorps Danny V’ who is by ‘Quasimodo Z’, dam sire, ‘Lupicor’.  They stopped the clock 26.85s in this 2phase class.  Almost a second behind was British Olympic rider, Holly Smith, with the lovely ‘Fruselli’ and in third place was the Irish rider, Dermott Lennon, who continues his good week of results here, this time with ‘Fleur IV’.  Fourth was German rider, Jens Baackmann, just back from Doha, and today riding ‘Aglaia J’.  In fifth was another Brazilian Olympic rider,  Yuri Mansur with the stallion,  ‘Away Semilly by ‘Diamant de Semilly’.

The Medium Tour 1.40 class was split into two sections,  Once again the Brits were on top form with Joseph Clayton riding  ‘Jalanna’ and Holly Smith riding ‘Kimba Castello’ taking the winning places.  In second were the Spanish rider,  Paloma Barcelo Martinez with ‘Habanero’ and Kendra Brinkop, who took second with ‘Eclatant’ and also a third with ‘Tombola Z’.  The other third place was taken by Polish rider, Marek Lewicki with ‘Come’.

The 1.30 Medium Tour didn’t miss out on a British winner, with James Whitaker taking the honours.  He was riding the incredible fast mare ‘Rumbolds Warriors Echo’ and stopped the clock in 58.62s.  Quite a long way behind him on time in 62.88s, was the Spanish rider, Hugo Alvarez Amaro with the gelding ‘Jimmy Phin’. In third was Isabel Fitzpatrick for Ireland with ‘Fourth of July’.

The Small Tour 1.40 had a British top four!  First was Iwan Carpenter with ‘Merllyn’s Chocca Nova’;  second was Eleanor Hall Mcateer with ‘Elleyette HH’;  third, Antonia Platt with ‘Amigo and in fourth Ava Vernon with ‘Billy Trysil’.  Fifth was the Japanese rider, Yuko Itakura with ‘I Dare You Reuvekamp’s’.

The 1.35 had an Irish winner, Daniel MC Alinden, with ‘AHG Whiterock Doctor Cruise’.  Second was Louise Ameeuw from Belgium with ‘Bayla de la Roque’ and in third was Lila Bremner with ‘Cocktail D’ Azur’.

Almost repeating the results in the Small Tour 1.40, the Brits took the top four places in the CSI 1*! 1.25/1.30.  Iwan Carpenter had another win, this time on ‘Merllyns Tiger Lilly’, second was Ava Vernon with ‘Here I’m Be’ and in third was Henry Squibb with ‘Dominant H’.  Fourth was Nicole Lockhead Anderson with ‘Spice Girl TW’ and in fifth was Spanish rider,  Juan Miguel Febrer Rui with ‘Chacco’s Magic’.

Tomorrow there are 12 classes and including the Big Tour Grand Prix, which has been moved in order to avoid the bad weather conditions that have been forecasted for Sunday.