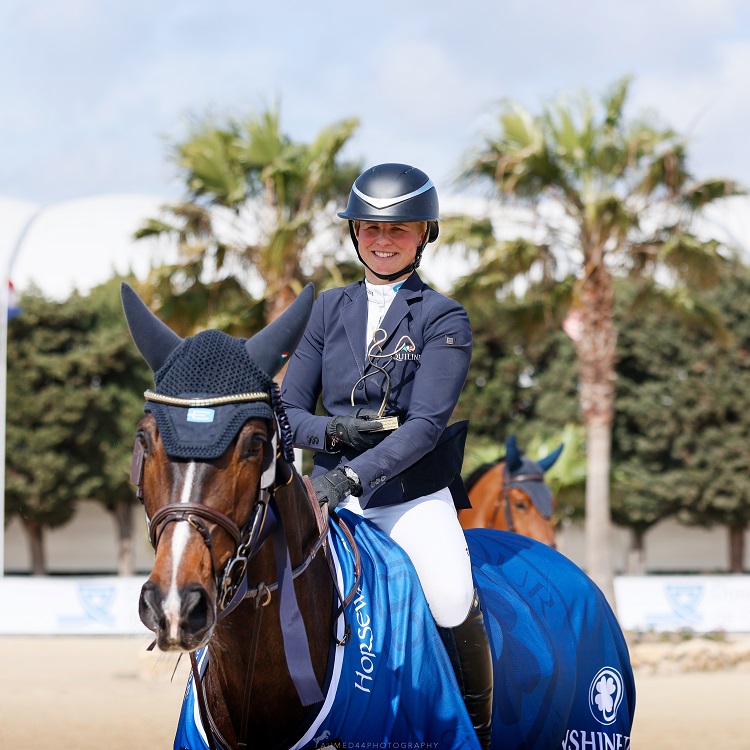 ‘Electric Joy’ ridden by Norwegian, Therese Henriksen was the well deserved winner of the 7YO Final today.  There were 49 horses in the class which was set at 1.40 and was a challenging course set by Marcos Núñez (ESP) in arena 5, Milton.  In the end five horses jumped clear in the jump off against the clock, and coming in to win in 36.17s was Therese with ‘Electric Joy, a gelding, by ‘Diarado’ who is by ‘Diamant De Semilly’, his dam sire is ‘Warsteiner 946’, who is by the very well known hannovarian stallion, ‘Weltmeyer.’  ‘Electric Joy’ is registered with the Norwegian Warmblood Association and both bred and owned by Gro Assland Våge.   He started competing with Therese in the autumn of 2021.  Therese told us after her win that  first she plans to go home to Norway and do a few more International shows there and then she will aim for the World Championships in Lanakan.  She likes the new indoor school to keep dry on rainy days and always comes here every year to train at Montenmedio.

Very close on her heels stopping the clock in 36.37s, in this exciting jump off, was ‘ESI Rocky’ ridden by Seamus Hughes Kennedy from Ireland.  ‘ESI Rocky’ is a bay gelding registered in the ISH studbook. His sire is ‘Stakkato Gold’, dam sire ‘For Pleasure’ and he was bred by the wonderfully named Ennisnag Stud and is owned by Clare Hughes. Seamus has been competing with him since last October.

In third place was British rider Emily Sage on her own Zangersheide Studbook registered, ‘Cadiz Z’ (‘Corydon Van T&L’ x ‘Caesar Van de Helle’) and this has not been the only success at the Andalucía Sunshine Tour for Emily, as she was second here in February with ‘Vogue TW’ back in our first Young Horse Finals, in the 6yr olds.  In fourth was Brazilian rider, Felipe Amaral with ‘For Pleasure de Moulin’ (‘For Pleasure’ x ‘Chin Chin’) and in fifth was Karin Ernsting (GER) with the lovely ‘Ping Pong Van de Lentamel’ (‘Emerald' x ‘Toulon’).

The 6YO Final was a big class today with 26 horses through to the 1.30 jump off and our winner was ‘Hannibal Style VK Z’ ridden by the Dutch jockey, Doron Kuipers.  They stopped the clock in 33.09s.  ’Hannibal Style VK Z’ is also registered with the Zangersheide studbook.  This stallion is by ‘Heineken VK’, who is by ‘Zirocco Blue  VDL’, dam sire, ‘Calvino Z’ and is bred and owned by Stoeterij van Kleef.  Doron told us, this horse was here at the Andalucía Sunshine Tour, as a five year old, he hopes to continue training him and plans to be back next year to do the seven year old classes with us.   Doron also said that he loves the variety of arenas here for developing his young horses.

In second place was ‘Curra Ferro’ ridden by Seamus Hughes Kennedy.  ‘Curra Ferro’ is ISH,  a smart black stallion by ’S Creevagh Ferro Ex Siebe’, dam by ‘Mount Diamond Flag’ and was bred by Ronnie Hollinger and he is also owned by Clare Hughes.  This pair stopped the clock in 33.09s.

In the 5YO Final the winner was ‘More Special’ ridden by Eric Van der Vleuten (NED) ‘More Special’ is a KWPN Stallion, bred by Verhallen and owned by Kees vd Oetelaar B.V and Springstal van der Vleuten.  His sire is ‘Grandorado TN’ and dam sire ‘I’m Special de Muze’, this pair stopped the clock in 36.15s.  Eric told us he got the horse just before he arrived here at the Tour, has been learning about him over the weeks.  Today everything just worked really well and he was really delighted with the win.  His plans for this year are, now he will give the horse a rest and then do a few national shows as he wants to give him plenty of time to develop.

In second place in 36.39s was ‘Avant Garde HST Z’ ridden by Olivia Gent (GBR).  ‘Avant Garde HST Z’ is yet another horse from the Zangersheide studbook, this chestnut mare is by ‘Agana van het Gerendal Z’, dam sire ‘Zicchini’  who is by ‘Cassini I’.  Bred at the Holsten Stables /Floris van Leuken and is owned by her rider.

Tomorrow jumping continues with almost 1000 horses taking to the arenas in a dozen classes which are held throughout the day and include the Farewell Young Horse classes and the 4* event starting up, and in this seventh week here, a total sum of 362,000 euros in prize money is ready to be won and there are six FEI Longines Ranking classes. The whole of the Andalucía Sunshine Tour 2022, is sponsored by Consejería de Turismo, Regeneración, Justicia y Administración Local de la Junta de Andalucía, a través de Turismo y Deporte de Andalucía.