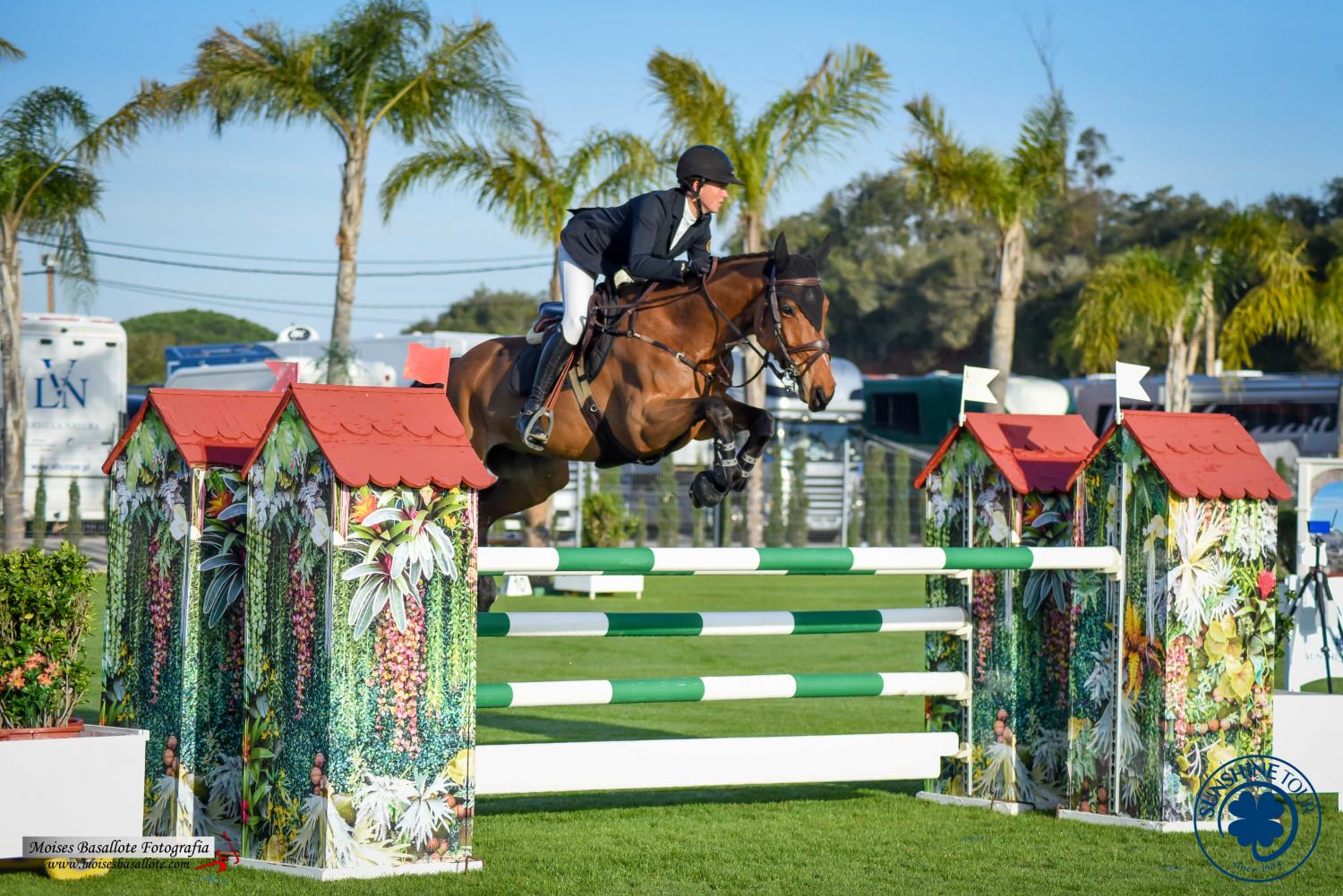 Spanish rider Javier González Fraga with the 5yr old Spanish Sporthorse “Cholita JGF” have had consistently brilliant results in all their rounds and remain well up in the top results in their classes.

Last week we finished off the Young Horse classes noting that Kim Emmen, Ignace Philip de Vuyst and Emma Stoker were names to watch this year at the Tour.  Today these three riders continued to prove their talents and are consistently ending up as leaders of their classes.

The 7yr old class was won by the very talented Dutch rider Kim Emmen, with “Astrid’s Lad”. This gelding is owned by the Bruntwood Stables. “Astrid’s Lad is the full brother of  “Blue Angel” ridden by Kent Farrington. The other 7yr old here is “Lady Angeles” and she is also owned by the Bruntwood Stables. She was the winner of the 5yr old Finals here at Montenmedio two years back.  The owner ofBruntwood, is Sean Cubitt, and we have bought a very strong team of horses here.  We hope that in the following weeks the results remain as good as they have begun”.

In second position behind Kim, was the Italian rider Giulia Martinengo with “Jotage B”.  The talented Emma Stoker from Great Britain was third with “Orphea HQ”. Emma is another of the riders who stands out due to the great performances of her horses, she also took second place in the 6yr old class with the lovely “Ferluche de Kergas”. “Orphea” is a super mare with a lot of character, she is by “Emerald Van’t Ruytershof” and owned by Axel Verloy. I have been riding her since she was five and last year here at the Sunshine Tour she learnt a lot in the 6yr old classes.  Truthfully her results are impressive.  She is a very careful and is gaining a lot of confidence competing in all the different arenas here at the Sunshine Tour”. Emma also told us that “we haven’t had “Ferluche” for very long at all.  We bought her as a very green 5yr old who had done nothing.  We only just took out her FEI passport to come over here and this is her very first International event and wow!  She is doing fantastically well.  Each time she goes in the arena she improves, she is naturally fast.  Last week it was an enormous surprise for her to do so well and get such great results.

Ignace Philips de Vuyst is the third rider who caught our attention last week with his mare “Olivia de Guldenboom”.  Today he was once again at the top of the 7yr old Section B, which was jumped on grass in the Carola arena. The class was run under table A, a two phase, timed class.  In second and third were two Italian riders; Clio Boni and Luca Moneta, riding “Logica” and “Epic”, respectively..

The Irish rider Susan Fitzpatrick also had a great day today with her 5yr olds  “Keatingstown Leia” and“Keatingstown Mister Cool” who took the top spot in one section of this class and second place in the other section respectively.

Tomorrow is the last day of the 2nd week of jumping for the Young Horses and the first of five CSI4* events, which are the new highlights at this 27th Edition of the Sunshine Tour.