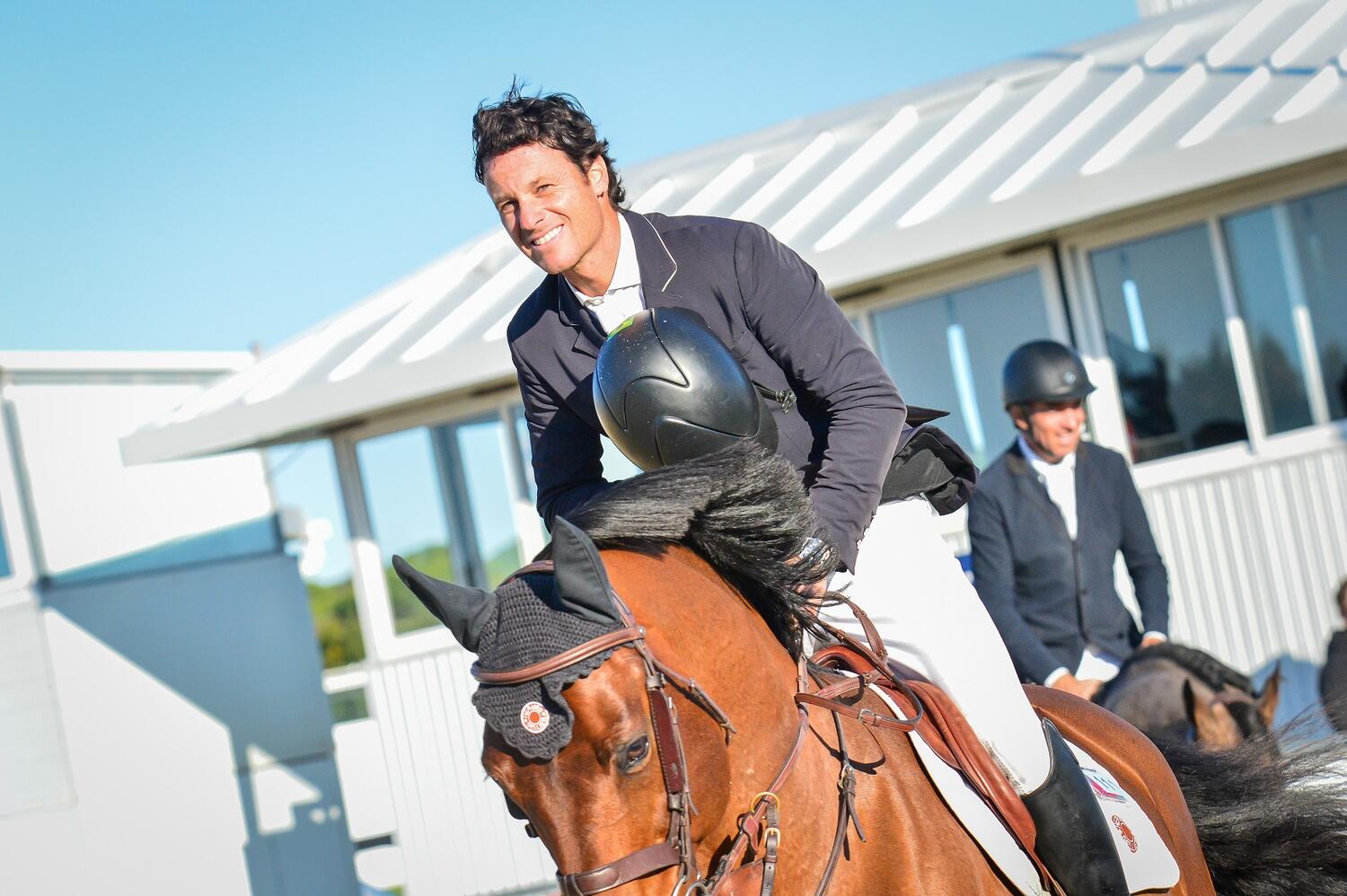 Armando Trapote, the current Spanish Champion, took second place with ‘Tornado VS’ and Matthew Sampson with ‘Guestlist’ was third

The last day of jumping of the first week here at the Andalucía Pre Sunshine Tour, finished off with an extremely exciting jump-off in the 1.45 Grand Prix class, held in the Milton arena.  With top international riders taking part, it was never going to be without a great atmosphere and as it was, 11 top riders got through to the jump off.

First to go in the jump off was local Spanish rider Armando Trapote, who currently holds the National Spanish Championship title.  He was riding the very agile ‘Tornado VS’ (‘Toulon’ x ‘Contender’) and he jumped an immaculate clear, in an extremely fast time of 37.85 seconds. He set the bar high and left all the work for the rest of the riders. No one managed to beat the time as the class progressed and,  as the last rider went in, Armando was still in the lead. So, last to go was Olympic Brazilian rider Pedro Veniss, with his long term partner ‘Boechamanns Lord Pezi Junior’ (‘Böckmann’s Lord Pezi’ x ‘Quattro 7’) who absolutely flew around the track, and stopped the clock in 37.10s, to the cheers of the crowd, taking the win!

Pedro told us, after his win;  ‘I’m very happy, I really like this place.I think my first time here was in 2000, so many years ago, I try to come every year. I feel my horses are very happy here, that’s why I always try to come to the show.  He also went on to say about the stallion, ‘Böckmanns Lord Pezi Junior’;  ‘I felt he was very good, the course was very fair.  He will have a week off next week and then we will start again in February’.

Pedro’s plans are; ‘we are going to try to do some Nations Cups, and to prepare a little bit for the Pan American games, thats the goal this year, …..  to qualify Brazil for the Olympics. I’m going to try my best to be in the team first, and then I hope Brazil will qualify for the Paris Olympics’.

With Armando Trapote taking second place in the end, in third, and just 0.05s behind him, was the British rider, Matthew Sampson with the lovely grey, ‘Guestlist’ finishing in just 37.90s, ending the week in style, a very successful time here so far.

Fourth was Swiss rider, Martin Fuchs, who has had the best results of all the competitors in this first week, and who is ranked number 2 in the world, for good reason. Today he was riding ‘Viper Z’ (‘Vigo D’Arsouilles STX’ x ‘Grannus’), who he won the 1.45 class on last Friday. In fifth was The French rider, Guy Jonqueres D’Oriola with ‘Aristo du Loir’ (‘Lando’ x ‘Ephebe for Eveer*La Silla’).

William Walker with ‘Ustino’ was the winner in the 1.35, and behind him the rest of the top placings were taken by Spanish riders. Alejandro Fernández was second with ‘Kadermie Van de Crumelhaeve’; Armando Trapote was again on the podium in third with, ‘Karl P’; Carolina Aresu García Obregón was fourth with ‘Diva de Boilary’ and Ismael García Roque was fifth with ‘President CL’.

Another British win in the 1,30, was by the hands of a regular rider here at the tour, Georgina Burchmore-Eames, who was riding ‘Kept Secret T’, and stopped the clock in the second phase in just 34.49 seconds. Spanish rider Noelia Bayarri was second with  ‘Polca de Olid’ and also fourth with ‘Club de Coeur’. In third was Swedish rider Elsa Sjöberf with ‘Turmalin 1202’ and in fifth was another Swedish rider, Jacob Hellström with ‘Starline’.

Swiss rider, Simon Bürki was the winner of the 1.25 with ‘Coranto’ and the Finnish rider Hanna Penttala with ‘Lion King WD’ won the 1.10.

The Andalucía Pre Sunshine Tour, is sponsored by the ‘Consejería de Turismo, Cultura y Deporte and co-funded by the European Union’. The Tour continues next week starting up again on Thursday, with a new CSI2* and the young horses classes (5, 6 and 7yr olds).