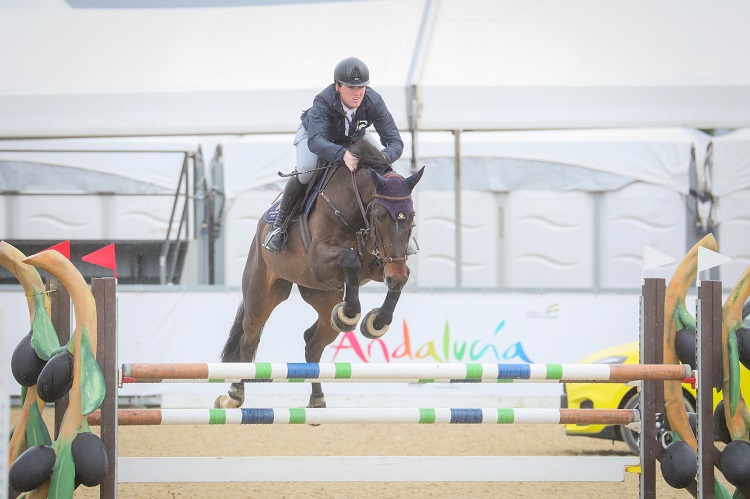 The first winners of the 5th week in the 2Phase Sp, 7YO classes here at the Andalucía Sunshine Tour

The fifth week of the Andalucía Sunshine Tour kicked off today with the Young Horse classes.  The 5 and 6YOs started off their jumping gently with FnoT classes and the 7YO with 2Ph SP.  Almost 400 horses jumped and each year group was split in to two classes.

The winner of one of the 7YO classes was Irish rider Sean Monaghan with ‘Domino Van Het Gehucht Z’, who Sean has been lightly campaigning her here since week 1. The mare is owned by Sharon Fitzpatrick from the Zangersheide stud book by ‘Dominator 200 Z’.  The other class was won by the Bulgarian Konstantin Van Damme riding the gelding ‘Kilnaboy Captain’ by ‘Namulus R’ dam sire ‘Chin Chin’.

In the first section the results continued with another well know Irish thing second place, Emily Turkington with the ‘Numero Uno’ sired ‘Tricolor MB’ owned by Tricolor LLC.  British rider, Adam Botham was third, with  ‘Cerano Van de Dijkhoeve Z’, another  Zangersheide, by ‘Clarimo’.  In fourth was Spanish rider Mariano Martínez Bastida with ‘Falbala Pironniere’ and in fifth was Kendra Brinkop with ‘I’m Fancy VDM Z’ who took bronze in the Young Horse Finals of the Third week here at the Andalucía Sunshine Tour, on the 23rd of Feb.  There were 72 horses in this class, with 38 jumping clear.

Each clear counts towards the horse’s qualifying sum needed to participate in the Finals on 23rd of March.

In the other 7YO class, James Whitaker (GBR) was second with ‘Just Call me Henry’ who is owned by Ian Whitaker and bred from the amazing stallion ridden by John Whitaker, ‘Argento’.  In third was the Australian event rider who has just arrived here, Christopher Burton,  one of Australia's leading event riders. He was a member of the bronze medal winning team at the Rio Olympic Games which was his second Olympic appearance.  Burto is well know for producing Young Horses and has attended the YH World Championship regularly in France, Le Lion d’Angers since 2014.  Today he was riding ‘Chedington Blue’ who is by ‘Balou Du Rouet’.  Fritz Kogelnig from Austria was fourth with ‘A Kind of Magic’ and Kendra did well again taking fifth with ‘Tabasco de Toxandria Z’.  In the 6YO classes there were 168 competitors and 134 clears, and in the 5YOs there were 98 competitors with 81clears.