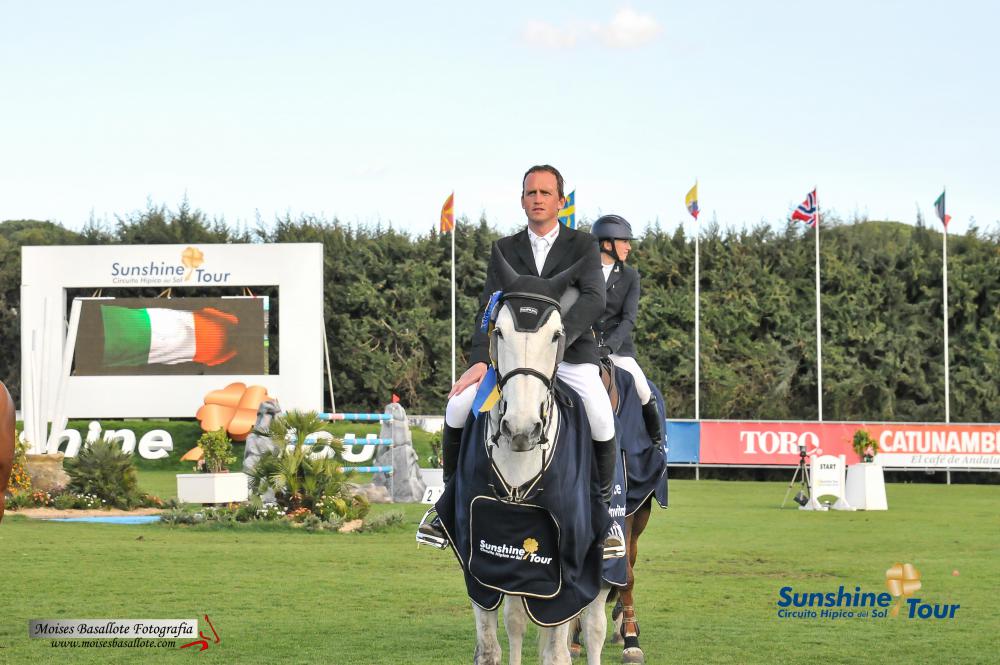 The Small GP was won by the Brazilian rider, Pedro Veniss on Anaya STE Hermelle. This class was sponsored by the Diputación de Cádiz.

The fifth week of jumping here at the XXIV Sunshine Tour ended today on a high note and in the sunshine. The Invitational GP was ridden on grass in the main arena named after the legend, David Broome. Today the 1.55m, course was built by Uliano Vezzani, the well known Italian designer and proved a solid test for the 50 best riders of the Tour. The jump off was fast and hotly contested with 100,000 euros of prize money up for grabs. Trevor Breen riding Bombay (Lord Z / Raffia by Bon Ami) repeated yesterday’s  win, this time stopping the clock in 38.84sec.

In the post prize giving interview Trevor told us, “I am very satisfied with today’s result, I have had a spectacular weekend of jumping here, winning the Big GP yesterday and now the Invitational as well. I am delighted to finish off the Sunshine Tour this way. This 11 yr old mare just keeps getting better and better.” Trevor Breen has competed at three Sunshine Tours, he told us he intends to come again. “The footing in the arenas is fantastic and I’m very happy to have jumped this weekend in the main grass arena.”

In second place and closely behind the winner, was the well known Belgian rider Karel Cox and Dublin Van Overis. Their time was 39.27sec, under a second slower than the winner. In third and fourth were British riders, Harriet Nuttall on the very consistent Galway Bay JED in 40.52sec and Holly Smith on Hearts Destiny was a smidgeon behind her in 40.78sec. Reed Kessler for the USA, did a lovely round to finish in fifth with Tradition de la Roque in a time of 41.10sec.

The Invitational Medium Tour was also in the main arena and was won by another American rider competing here at the tour, Adrienne Dixon with the Irish sports horse Killossery Kaiden.

Her time was 35.32sec and she was first to go in the jump off. This very fast time set the other competitors alight and there followed some exciting rounds.

The British rider, Morgan Kent stepped up to the post with yet another Irish sports horse Drumcarrick Verdi and took second place in 36.46sec. Third and fourth place were taken by Spanish riders, Armando Trapote on Tinkerbell whose time was just a fraction slower, 36.66sec and the Otti Verdú on Top Lulúin 36.75sec. In fifth place was the British rider, Scarlett Charles on Quick Stepp in 39.42sec.

The Invitational Small Tour was won by the Peruvian rider, Carlos Merino on Ofelia Te Quiero in a jump off time of 36.52sec.

This class was also on grass in the Hickstead arena. The rest of the podium places all went to British riders; in second place in 37.51sec was Kayleigh Watts on Colton Playtime; in third was Carron Nicol on Nistria V/D Winning Z in 37,72 segundos; in fourth was Brandon Lovely on Fantaland in 37.86sec and in fifth, was Pollyanna Gredley on Unex Clintan MB in 39.90sec.

In the Ladies Invitational there was a win for Swedish rider, Stina Lillje on Rihanna K in a time of 38.69sec.

The American rider, Julia Nagler, was close behind in 38.97sec and took second place with Killossery Kuidam. The Finnish rider, Sonia Leena Hungerbuhler was third in 40.45sec on Balumba Z and in fourth was the Dutch rider, Mischa Everse on Kerswin Van ‘T Roosakk in 42.21sec. The British rider Faye Adams on Fiva La Vida took fifth place in 42.21sec.

There was a Brazilian victory in the 1.45m Small GP, sponsored by the Diputación de Cádiz. Pedro Veniss riding Anaya STE Hermelle had the winning time of 33.11sec in the jump off phase.

The Irish rider, Richard Howley on Cruising Star was over a second slower and took second place in 43.43sec. In third was Karel Cox who had a very successful day overall, this time he was riding Evert** and finished in 35.41sec. The Italian, Luca Moneta on Neptune Brecourt was fourth and the British rider, Harry Charles on Vivaldi Du Dom was fourth.

The 1.40m, Big Tour B class was won by the Spanish rider Gonzalo Añón Suarez on Qlamp D’Ivraie. In second was the Greek rider, Andreas Vardinogiannis on Boris; in third was the Irish rider, Michael G Duffy on Scenletha.

The Big Tour A2, was won by the Belgian rider, Virginie Thonon on Falbert SB; second was the Chilean rider, Agustín Covarrubias on Solaguayre Quitrina and in third was Harriet Nuttall on Dulf.

The Big Tour A1 had a British top three, Holly Smith on April IV, Joe Whitaker on Urbino de la Roque and Thomas Whitaker on Peppercorn.

The 1.35, Medium Tour B class was won by the well known Spanish rider, Luis Astolfi on Narla. In second was the Irish rider, Darragh Ryan on Santa Catalina and in third was the Portuguese rider, Lucas Rosado on Up Du Salbey.

The Medium Tour A, was won by the Spanish rider, Patricio Valdenebro del Rey on Ipanema DC. In second was the American rider, Rosalie Biedron on All Gold Des Isles and in third was another Spanish rider, Jorge Bidron Daurella on Lara.

The Small Tour A had a British top two, Hollie Pearce on Ryans Hollie took the win with Jake Ward on Frederick VII in second. In third was the Norwegian rider, Malin Eide on Lord Oder III.

So that wraps up the XXIV Sunshine Tour. With 2,000 horses passing through the gates and 1,200,000 euros of prize money being won. And finally a note from the director of the Tour Teresa Blázquez:

“Overall we are very satisfied and content with the competition. It has been a difficult year with extremely adverse weather conditions but all in all it has turned out well. It is an honour for us that so many top international riders choose to start off their season with us here at Dehesa Montemedio. The Ranking classes and the qualifiers for the Junior and Senior, European Championships, mean that we have seen the very best level of competition here this year. With the plethora of equestrian professionals working hard here at the Tour we are able to deliver a very organised, serious and comprehensive event and for this I would like to thank the great team of workers that we have.