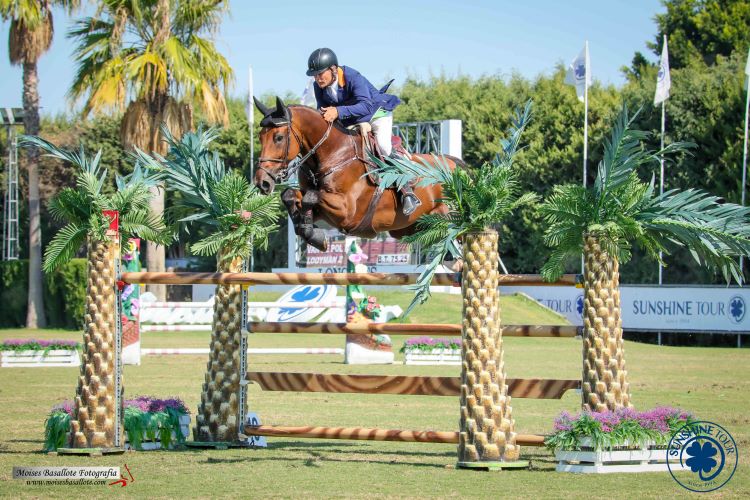 Second place went to the Portuguese rider, Luis Sabino Gonçalves with  the beautiful Argán de Beliard. Third place to the Olympic rider from the USA, Laura Kraut with Goldwin.

It was yet another lovely warm day here at the last day of the new Autumn Tour  here at the Dehesa de Montenmedio.  The last class of the day was the long awaited big GP class which was held in the large main grass arena that was named after the legendary rider from the UK, David Broome.  The GP was designed by Gregory Bodo and was set at 1.50m with two upright fences, number 8 and 9 set at 1.60m.  There were 45 entries in this class and the demanding track tested the riders and horses as it should for an Olympic Qualifier for Tokyo.

Just 11 riders got though to the jump off with many others falling foul of some difficult distances, one an oxer to an upright from fences 3 to 4 and one a triple bar spread, later on in the course that was followed by the penultimate fence, a double of white uprights of which the first element fell a few times.  The quality of the horses and riders taking part was obvious and there were some really beautifully ridden rounds.

In the end, Henk Van de Pol rode two superbly positive rounds and literally flew around the jump off course winning by just under two seconds in 38.8sec. He was  riding the wonderful Looyman Z (Numero Uno x Wellington).  Luis Sabino Gonçalves riding Argan de Beliard (Mylord Carthago*HN x Ahorn) had a beautifully neat round and this Portuguese pair took second place in 40.62sec.  The American legend, Laura Kraut with Goldwin (Emeral x Understone Van de Kapel) also rode a foot perfect round finishing in third on 41.87sec.  In fourth and just off the podium was the lovely stallion Grand Cru VD Vijf Eiken ridden by the Canadian Vanessa  Mannix also had a lovely clear in the jump off.

The 1.40m class was very competitive today, with 38 riders vying to win.  In the end another super Canadian rider, Kara Chad with Matt Sampson’s, Firefly W could not be beaten.  They finished this speed class in 60.93sec well in front of the Spanish rider Mariano Martínez Bastida with Cleartoon who has had a great run of results here at the Tour.  Today he finished in 62.62sec and third place was taken by the New Zealand rider Bruce Goodin with Collin M in 63.72sec.

Mariano Martínez Bastida topped the podium in the 1.35m class that had a Spanish top 4.  He won the class with Hybalia; second was Eduardo Álvarez Aznar with Mogambo and third was Paloma Barceló Martínez with Vivaldi D’Hyrencourt with Jesus Torres coming in fourth on Grupo Prom Hacianda.

Irish rider Joanne Sloan-Allen with Wicked Hope were the winners of the 1.25m class, with another Canadian in the rosettes, this time in second, was Samantha Vanderwoude riding Indiana II.  The Peruvian rider, Carlos Merino with the wonderful, Ofelia Te Quiero took third place.

Ireland had yet another win in the 1.20m class from Victoria Loane and Juicy.   Russian rider, Victoria Alexeeva with Popcorn de Tiji Z was second and coming in third was the Spanish rider, Marta Auñón González and Larzagui.

That wraps up the 4th week of the Autumn Tour here at Montenmedio.  There is a small break now.  Competition resumes on the 21st of November with Young Horse Classes and a CSI3* where around 300 horses are expected to participate and with many top international riders eager to jump again in the wonderful arenas here at the installations.