William Whitaker has arrived and straight away wins the first big class of the week, with ‘Jalellah 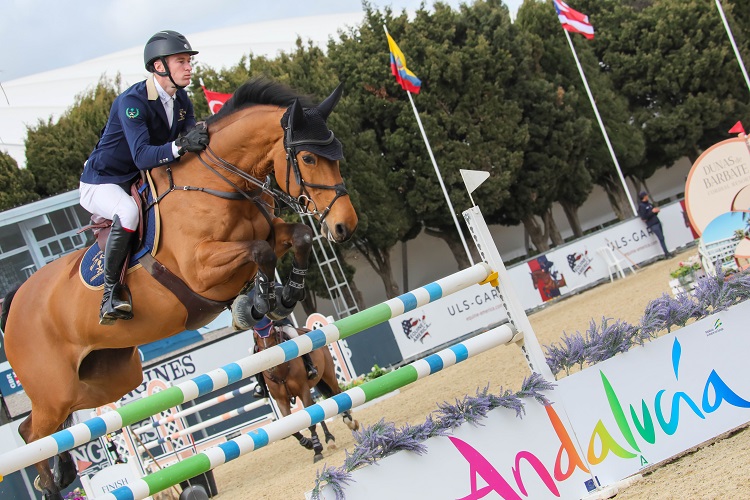 James wins the 1.20 with ‘Rumbolds Warriors Echo’ and Ellen the 7yo class with ‘SJL Fizzy Tart’

Indeed British riders shine across the board today here at Montenmedio

There was almost a British takeover here today at the Andalucía Sunshine Tour!  This is the fourth week here and the 2*CSI started up with the three YH classes and 5 height classes from 1.20 to 1.45.

When the Whitaker families are here you can guarantee they will be on the podium sooner or later.  Today they took three of the wins, the biggest being by William Whitaker in the 1.45 class, riding ‘Jalellah OL’ (Chacco Blue x Baloubet du Rouet).  William has only been competing with this mare since last August, but she has been beautifully brought on, was with Louise Saywell for a while, and also for a short time last spring with the Olympic rider, Holly Smith who has also just arrived here and also won her section of the 1.40 today.  ‘Jalellah OL’ is a lovely mare and well known here in Spain, her first competition experiences were with our very own Armando Trapote,  back in 2016.  Today she won this 2phase Sp, class in 23.79s just ahead of Irish rider, Daniel Mc Alinden with bay gelding, ‘AHG Whiterock Doctor Cruise’ who really stepped up to the mark.  This is also another relatively new partnership as Daniel took over the ride last July.  In third was the Dutch rider Doron Kuipers on the KWPN, ‘Hollywood VK’; bred by Stoeterij van Kleef; Fourth was the Brazilian rider, Felipe Amaral with ‘Germanico T’ and in fifth was Italian Luca Moneta with ‘Beauvoir de Pontacq’.

James Whitaker was the winner of the 1.20 with ‘Rumbolds Warriors Echo’, second was another British rider, Iwan Carpenter with ‘Merryns Tiger Lilly’ and in third was Swedish rider,  Linda Lilje Millqvist with ‘Juloo Castanoo’.

Ellen Whitaker took the top place in the 7yo class with the super ‘SJL Fizzy Tart’ who has been doing so well here.  This was a 2phase Sp, set at 1.30 and their time was the only one under 32s.  In second place was the Spanish rider, Francisco Asís Arango Lasaosa with ‘Paulette Van Overis’ and in third, was Maximilian Weishaupt (GER) with ‘Friday for Future’.

The 1.40 class was split into two sections In first places were Holly Smith who was riding ‘Kimba Castello’ and another British rider who has already had great results here, Adam Botham with ‘Ebanking’  In second places were the Canadian rider, Rebecca McGoldrick with ‘Horatio Van Erpekom’ and the Irish rider Peter Moloney with ‘Budgie’.  In third were Danish rider ‘Tina Lund with ‘Chacceldi’ and Frederike Staack (GER) with ‘Copain du Perchet CH’.

Another Irish rider was the winner of the 1.35, speed class;  Alex Finney with ‘Duco’ who stopped the clock in just 60.12s.  In second was Kendra Brinkop (GER) with ‘Eclatant’ in 62.39s, and in third, was Laura Diez Collado (ESP) with ‘Veroney de Walyro’.

There was British top three in the 1.30;  Iwan Carpenter with ‘Merllyn’s Chacco B’; Joseph Clayton with ‘Unex Arantos’ and Antonia Platt with ‘G Star Blue’.

And so we start off the fourth week here at the Andalucía Sunshine Tour;  jumping will continue until Sunday when we will celebrate the GP with the best riders of the week participating. The whole event is kindly sponsored by the Consejería de Turismo, Regeneración, Justicia y Administración Local de la Junta de Andalucía.