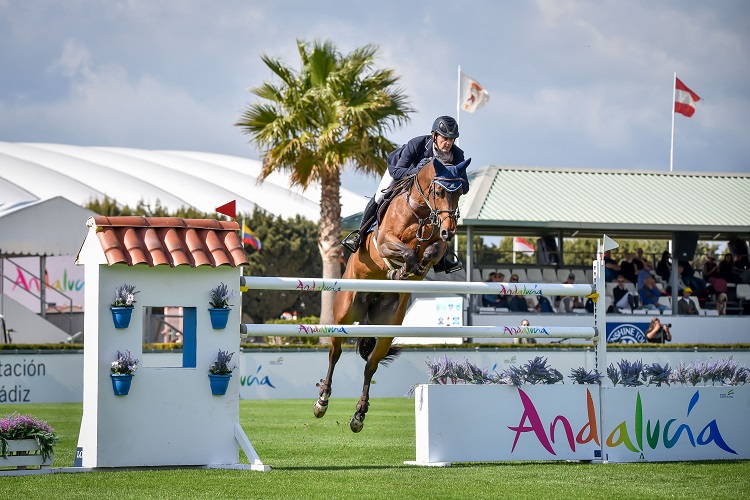 More than 850 horses jumped today at the Andalucía Sunshine Tour

Irish Olympian Billy Twomey was the winner of the 1.50 Big Tour speed class today, with ‘Frenchy VDS’, who is by the stallion Cornet Obolensky, dam sire by Quidam de Revel.  This quality mare stopped the clock in 59.29s with a super clear, in this demanding class, where faults were had by other horses across various fences.  The class had 70 entries and in the end 33 riders went clear, within the time.  In second was another Irish rider Eoin Gallagher who was riding ‘Over Lux’ and finished in 59.67s.  Third was Pedro Veniss for Brazil, the winner of the Grand Prix in week Two of the Andalucía Sunshine Tour.  Today Pedro was riding ’Boeckmannns Lord Pezi Junior’.  In fourth was Swedish rider, Marcus Westergren with ‘Astree de Burgo’ and in fifth was Sara Vingralkova (CZE) with ‘Mega Special DC’.  This class was a qualifier for the Longines Ranking,  Andalucía Grand Prix,  that will be held on Sunday .

The 1.35 Big Tour class was won by ‘tour regular’, Derin Demirsoy who stopped the clock in 55.76s with ‘Empire EH Z’. Lithuanian rider, Karolina Vasiliauskaite was second with ‘Venezio of Coco’ and in third, was Argentinian rider Richard Kierkegaard with ‘Contiki’.

Laura Klaphake (GER) had a brilliant win in the Medium Tour 1.45.  She was riding  ‘Bantou Balou Old’ and they were the only pair to stop the clock in under 60s.  Dermott Lennon was second with ‘Fleur IV’ and another German rider who is having a very successful tour, Kendra Brinkop, was third with ‘Etania VA’.

Holly Smith (GBR) was the winner in the 1.40 with ‘Kimba Castello’;  Irish rider, Michael Pender was second with ‘HHS Fortune’ and another British rider was third,  Joseph Clayton with ‘Unex Garcon de Lui’.

Top two in the Medium Tour 1.30 were British;  James Whitaker took the win with ‘Rumbolds Warriors Echo’ and in second was Graham Gillespie with ‘Jirado Van’t Koningshof’.  Third was the French rider,  Ines Joly with ‘Illissima DS’.

Results of the Young Horse classes today: In the 7YO  it was Irish rider,  Sean Monaghan who continues have great results here with ‘Domino Van Het Gehucht Z’ who he also won with on Tuesday.  British rider Nicole Lockhead Anderson was the winner of the other 7YO class, with the mare ‘Picachu TW’.

Bianca Babanitz (AUT) is still excelling with her horses in the 5YOs and today she took the two top places in one of the classes with ‘My Boy Elvis’ winning, and ‘Safe Me’ coming second.  In the other 5YO class the British rider, Ronnie Jones was the winner with ‘Ruinart Rose’, who also won the class yesterday and has jumped clear all week.

More than 850 horses jumped here today at Montenmedio, a busy day that meant at some points seven arenas were running simultaneously.  Tomorrow there are 13 classes in this truly international event which has attracted elite riders from 50 countries, here to Andalucía, to participate.  Tomorrow there are two Federación Ecuestre Internacional, (FEI) Longines Ranking classes and over the weekend there will be four more, in total six this week.

The whole event is sponsored by the Consejería de Turismo, Regeneración, Justicia y Administración Local de la Junta de Andalucía.  This allows us to offer all visitors free entry and parking at the facilities.  We also can offer visitors a complete day out, not only watching top international riders, but there are various wonderful restaurants to choose from that offer a wide variety of local delicacies, there is also a very interesting shopping area.  For those of you that cannot join us, all the action is streamed live on our web site sunshinetour.net  and through our free App.